With Watchmen hitting theaters recently, comics are having yet another moment in the pop-culture sun. And if you’re a fan of the indies, you probably know Bluewater Comics. You may have read their “sequels” to some of your fave Hollywood mythology films—like The Seventh Voyage of Sinbad, Clash of the Titans, and Jason and the Argonauts—or you might be more familiar with their monthly books, such as 10th Muse. But I bet you didn’t know that the people behind Bluewater are huge PETA supporters. Although, based on how awesome they are, I’m sure it’s not exactly a shock.

Our friends at Bluewater have just created the latest ad in PETA’s “Rather Go Naked Than Wear Fur” series, featuring four of their biggest stars—Emma Sonnet from 10th Muse, Diana Moore of JudoGirl, Scarlet of VSS: Nemesis Rising, and Isis from the Legend of Isis—posing au naturel to protest the cruel fur industry. Check out the ad below: 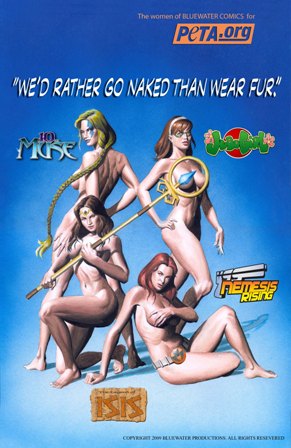 Who’s the next comic book character you want to see in an ad for PETA? Let me know by posting a comment below. Personally, I’m voting for my man Hellboy (I just finished Darkness Calls and it was great!).