Chained to a cinderblock and wrapped in a fur coat in the summer heat, a PETA supporter took to the streets of Raleigh while a throng of demonstrators held signs reading, “Heat Killing You? Imagine How She Feels,” as well as images of chained dogs languishing in backyards. PETA’s point? To let passersby know that dogs condemned to a life outdoors suffer and die in the heat daily—and that the best way to help them is to bring them inside and ask local legislators to pass laws requiring dog guardians to do so. 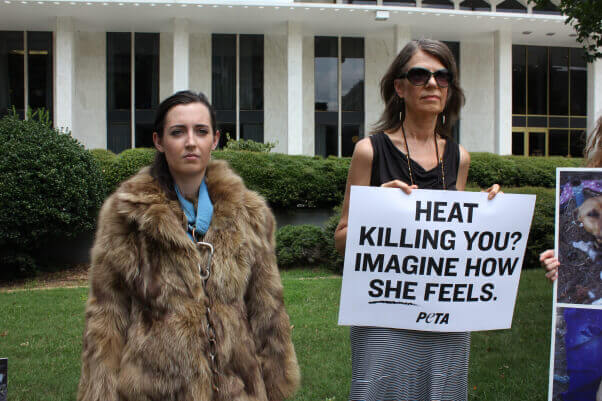 “PETA is asking legislators to give every dog a break from the heat by enacting laws that ban chaining,” says PETA Senior Vice President Daphna Nachminovitch. “Kind people everywhere can pitch in by bringing dogs inside and reporting any instances of animal suffering to authorities.” 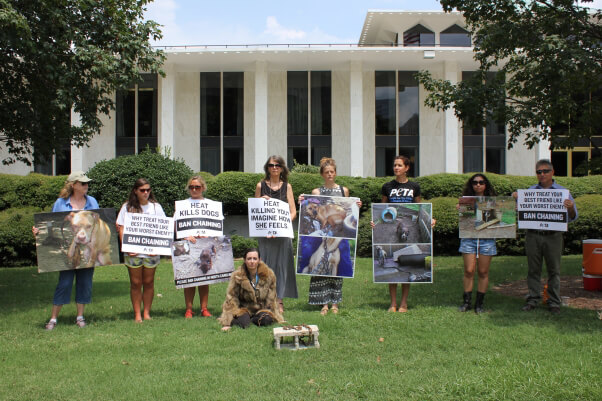 In just this past month, numerous preventable heat-related deaths have occurred, including the following:

Countless other dogs, including many whose deaths are not reported to the media, endure similar, agonizing deaths. PETA regularly finds chained dogs who are suffering when its fieldworkers travel to rural North Carolina communities to help animals in need.