As the Fairbanks North Star Borough moves forward with plans for a new recycling center, PETA sent a letter to Mayor Karl W. Kassel this morning offering to help reduce the cost of the program by paying to place this ad on recycling bins, trucks, and centers. 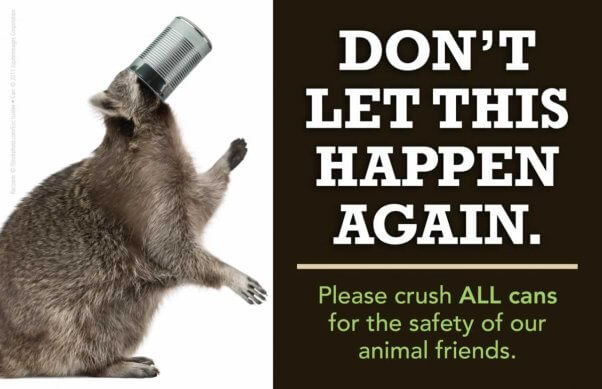 “Aluminum cans, plastic cups, and open jars can become death traps for hungry or inquisitive animals if they aren’t disposed of properly,” says PETA President Ingrid Newkirk. “We’re asking Fairbanks not to waste this opportunity for ads on its recycling bins that would reduce both the risk to wildlife and the cost to the city.”

PETA encourages everyone to keep all garbage in tightly sealed chew-proof containers, rinse out aluminum cans and put the tops inside so that they can’t cut an animal’s tongue, crush cans and cups, and cut open empty cardboard and plastic containers so that small animals can’t get their faces or heads trapped inside them.