Whoopi Goldberg certainly didn’t shy away from controversy on her first appearance on The View—she came right out and offered the following defense of Michael Vick:

“He’s from the South, from the Deep South … This is part of his cultural upbringing”

I have no idea where she got that one from, but I can tell her right now that there are an awful lot of people in the South who’d be pretty upset by the implication that electrocuting animals is somehow “part of their heritage.” Or, as PETA President Ingrid Newkirk put it in the letter she wrote to Whoopi yesterday,

“Those who fight dogs do so in New York, Chicago and even the Republic of Ireland, and what unites them is lawlessness and callousness, not whether they eat grits or Belgian waffles for breakfast.”

Michael Vick needs a lot of things right now—some serious counseling for a start—but he doesn’t need anyone to give him lame excuses for his decision to torture dogs for pleasure and profit. He needs to face that horrible fact all by himself.

Ingrid spoke with Whoopi on the phone last night after she received the letter, since Goldberg actually has a good track record with animals outside of this incident, and Whoopi explained that she had never intended to appear accepting of cruelty. Let’s hope she makes up for it with some positive comments about animals on The View after this rocky start. 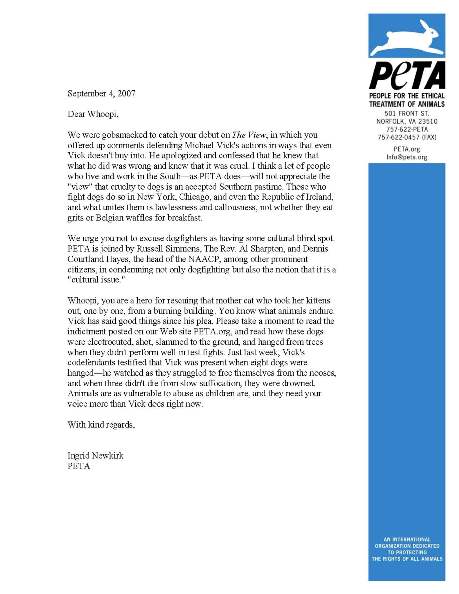