It’s not even as official an observance as “Talk Like a Pirate” Day, but during the Discovery Channel’s “Shark Week,” the barrage of excited chatter makes it seem like sharks are in the air—almost literally this year, with the addition of all the Sharknado fans.

Unfortunately, a lot of the attention tends to focus on sharks as “dangerous” animals. But while many are certainly skilled predators, aquatic animals face a much deadlier killer—humans. So PETA (no stranger to generating excited chatter) marked the conclusion of Shark Week with a banner flyover above the beaches of Cape Cod—where a recent shark sighting caused a beach closure—to set the record straight about who is the most fearsome marauder in the sea. 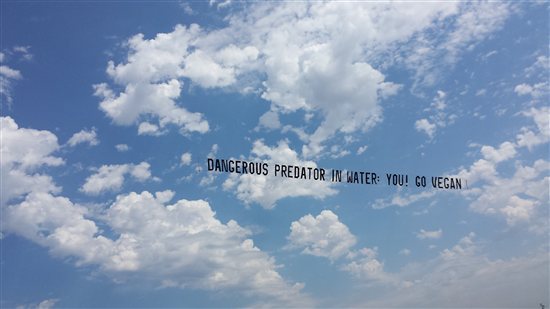 Seems some of those marauders are blaming the Great White’s presence on the increased number of seals in the Cape Cod area. The commercial fishers hate the seals because the animals insist on continuing to eat fish (which they have to do to survive), leaving fewer to be caught and sold to humans who want to eat the fish instead (which we definitely don’t have to do to survive). As one fisher told the media, “It’s indicative of an environment which is somewhat out of balance.” Uh, right, pal—and if you want to know who’s responsible for that imbalance, take a look in the mirror! (And you might want to look up the definition of “irony” while you’re at it.)

Cut the line on fishing—choose humane and healthy vegan foods instead!