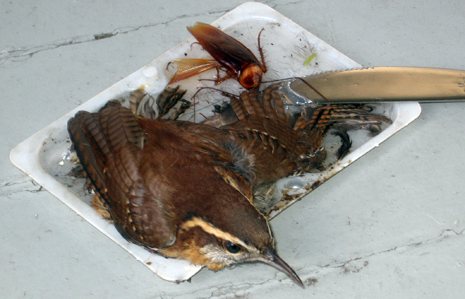 Customers were horrified when they discovered two songbirds stuck to a glue trap at a Walmart store in Indiana. One customer rushed the birds to a wildlife rehabilitator, while another contacted PETA. We alerted law enforcement and Walmart, and Walmart acknowledged that it has a policy against using glue traps for bird control but claimed that the traps had been set for rodents. Glue traps are (obviously) indiscriminate and ensnare any animals who are unfortunate enough to wander across their path, so Walmart removed the traps that had been set in that store.

Many “non-target” animals—including birds, squirrels, gerbils, hamsters, and even kittens—suffer immensely and die in glue traps every year. One tiny kitten in Boston nearly starved to death when she became ensnared in a glue trap. PETA has asked Walmart to stop using these traps in all its stores.

If you know of any local businesses, schools, or property management companies that are using glue traps, urge them remove the traps immediately and contact PETA if they won’t.