For 17 days, the world watched in heartbreak as a distraught Southern Resident orca mom known as Tahlequah (or “J35”) carried the body of her dead calf through the ocean, seemingly unable to say goodbye. Showing awesome teamwork and solidarity, other members of the orca’s family or social pod—known as the “J pod”—helped her keep her calf’s body from sinking into the depths. According to one report, some experts who have been observing these orcas have expressed the belief that these remarkable animals were holding “their own version of a wake or funeral.”

This orca mother has been holding her dead calf afloat for more than a week in a "heartbreaking" ritual.

As a result of this story, Southern Resident orcas—and their plight as an endangered species—have been catapulted into public consciousness. Seeing Tahlequah mourn her calf, we felt how strong the bond between mother and child is in orca families. Watching the J pod mourn for 17 days was hard, but when you realize that Lolita—who has been held captive for over 45 years in the world’s smallest orca tank—is also a member of the Southern Resident orcas (from the L pod), you’ll be crushed.

At 4 yrs old, #Lolita was torn from her family during the largest capture of orcas EVER—80 were corralled #FreeLolita pic.twitter.com/WGybXiaDmI

Marine parks like SeaWorld were complicit in the violent wild capture of orcas.

In 1970, more than 90 orcas were stalked and then herded into a 3-acre net by the use of deafening explosives, speedboats, and airplanes in Puget Sound, a deep inlet of the Pacific Ocean off the coast of Washington state, where the Southern Residents frequently swim. During the wild capture, young calves were torn away from their mothers. The helpless mothers could do nothing but watch as their children were taken away—and they would never see them again. During the 15 years of wild capture that followed in Washington state and British Columbia, as many as 307 cetaceans were caught this way (including a young Lolita), 55 were transferred to aquariums or marine parks like SeaWorld, and at least a dozen died during capture operations. The Southern Resident orca population was reduced by more than 30 percent, and to this day, it has not recovered.

While many articles about Tahlequah cite declining salmon populations as one reason that her species is endangered, it’s critical to remember that Southern Resident orcas became endangered, in part, because of the actions of SeaWorld and the Miami Seaquarium. In an official report, the National Marine Fisheries Service stated, “The capture of killer whales for public display during the 1970s likely depressed their population size and altered the population characteristics sufficiently to severely affect their reproduction and persistence.” 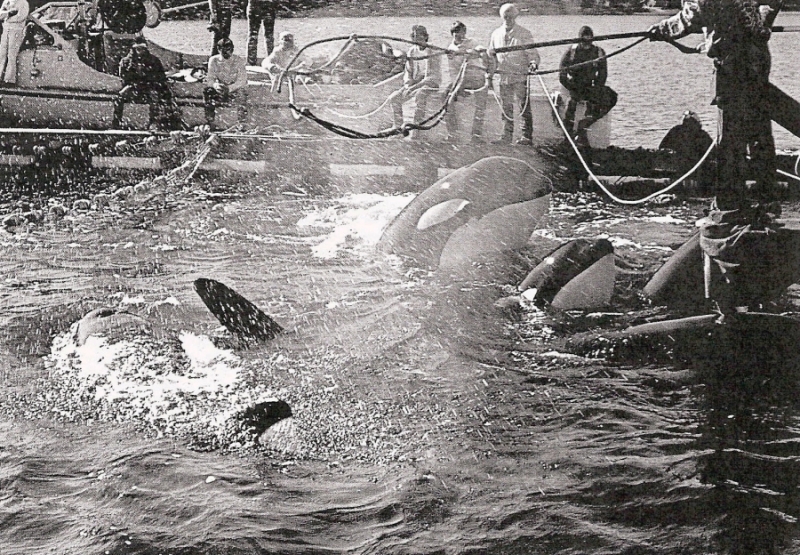 Lolita is the sole survivor of the horrifying wild capture described above. Today, she sits in a tank some 3,500 miles from the open ocean waters in which members of her pod still swim. Imagine how her family must have grieved for her, and consider how much she’s lost since being abducted and held captive for decades.

Join the Effort to Free Lolita

The tide of public opinion is turning. Today, we recognize the better parts of ourselves in orcas like Tahlequah and Lolita: They’re caring family members and unique individuals with complex personalities and emotions. It’s no surprise that in the midst of a wave of public support for the wild Southern Resident orcas, the abusement park SeaWorld saw a bevy of PR problems.

A Mom is a Mom in any species: mother grieves: Orca whale continues to carry her dead calf into a second day https://t.co/0bzMKPxECu via @seattletimes

From #BoycottSeaWorldDay to @ThomasCookUK dropping their support – it’s no surprise #SeaWorld had a horrible July 👎 https://t.co/chpiEqGe0P

You can take action to help Southern Resident orcas. Please don’t ever go to SeaWorld or other marine parks that keep intelligent, feeling animals locked in barren tanks. Share this page with your friends who are also concerned about orcas like the Southern Residents, and then be sure to take the actions below: