Mike Casey is having a tough time finding a place where he can continue to exploit chimpanzees. Last year, Clark County, Nevada, told him to hit the road after learning from local animal advocates and PETA that Casey was illegally holding chimpanzees and a capuchin monkey there when he wasn’t renting them out for use in TV, films, ads, and events. And now, Nye County, Nevada, has told Casey that he isn’t welcome there, either, after PETA and local supporters informed the Pahrump Regional Planning Commission about Casey’s documented abusive actions, including: 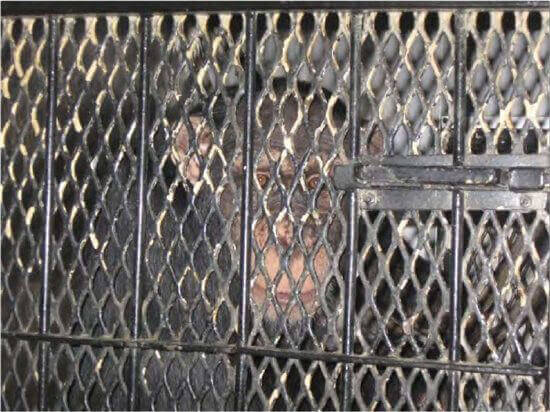 Hannah, one of the chimpanzees imprisoned by Mike Casey.

Casey will now have to move his operation, and you can bet that PETA will be close behind.

This is the second victory for exotic animals in Nye County in as many months. Officials also recently yanked animal exhibitor Karl Mitchell’s permit to keep exotic big cats after PETA and local supporters informed authorities that the U.S. Department of Agriculture had permanently barred Mitchell from exhibiting animals because of numerous violations of the Animal Welfare Act.

Let’s keep the pressure on exotic-animal abusers. Please send a polite e-mail to the law firm The Ticket Clinic and ask it to pull its current ad, which features a chimpanzee.