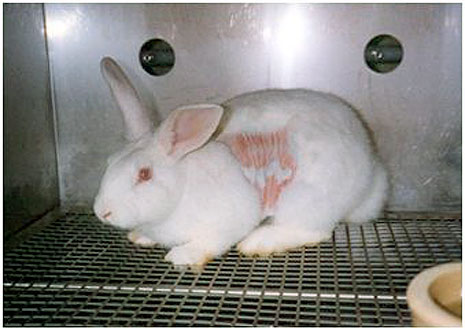 Almost 20 years ago—also in response to PETA pressure—the DOT approved the use of the non-animal Corrositex® tests to replace the use of rabbits in painful skin corrosion tests. (The DOT requires companies to test chemicals for corrosivity before they are transported.) But rather than promote the kinder test, the DOT required companies to jump through hoops to avoid the animal test and actually told some companies to conduct both the rabbit and the non-animal test and to use whichever results they preferred! All this, even though the agency acknowledged that Corrositex® results are more precise than the results of the rabbit test!

Now, thanks to a PETA rulemaking petition and all of you who spoke out against this cruel practice, the DOT will promote and encourage Corrositex® and other non-animal testing methods, thus saving the lives of countless rabbits.

Skin corrosion tests are a one-way street to pain and suffering and are as ghastly as they sound: Experimenters apply corrosive chemicals to the shaved backs of rabbits for up to two weeks before the animals are killed. The chemicals often cause severe burns, and the animals are given no pain relief.

And because the non-animal methods that use human skin models are more reliable than the rabbit tests, the DOT’s new regulation will improve protections for humans as well, thus proving once again that good science and humane science do go hand in hand (or paw in paw, as the case may be).

P.S. While we’re thrilled with this victory, we still need to pressure the DOT to update its website, so please stay tuned in case we need your help again!