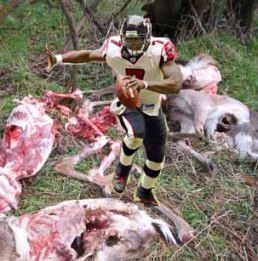 I hadn’t been planning on writing too much more about Michael Vick, given that most people are on the same page that dogfighting is reprehensible and that if Vick is found to have any involvement in the sport—which is looking more and more likely—he needs to be punished to the fullest extent of the law. But this story I read on The Fanhouse today is just too much. Apparently, the much-maligned Falcons QB is building a second property near the site where 60 abused dogs were found more than a month ago. Vick’s plans for the property? To build two horse stables on the land so that he can hunt deer. How is it that, with weeks of scrutiny focused on this guy related to deadly serious allegations of animal abuse, he seems to have completely failed to grasp the fact that now is just a really bad time for him to be seen in public acting out his apparent need to see animals suffer. How about making a donation to an animal charity? Or coming out publicly to talk about the horrors associated with dogfighting? No, Vick’s response to all the outrage is to throw himself into his work building a place where he can kill deer. Regardless of what the legal outcome of this case is, Vick has made it abundantly clear to anyone who’s been following this story not just that he couldn’t care less about animal abuse, but that he doesn’t even see why it’s a problem.