About an hour ago, PETA campaigners and activists converged on NFL HQ in New York to urge Commissioner Roger Goodell and the NFL to suspend Michael Vick in light of his recent indictment for alleged involvement in the horrific cruelty associated with dogfighting—including allegations that he was killing dogs by hanging, slamming them to the ground, drowning, and electrocuting them. Surrounded by reporters and TV news crews, more than 75 activists lined the streets in front of the NFL building, holding signs reading “NFL: Sack Vick,” handing out stickers and leaflets to passersby, and making it abundantly clear—just in case Goodell hasn’t figured it out yet—that the NFL’s weak response to Vick’s case is unacceptable. 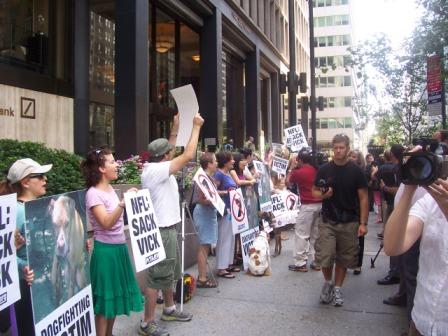 The massive turnout at this demonstration should be indication enough to Goodell that his decision to allow Vick to play in spite of these disturbing charges is going to be a major PR headache for the NFL, to say the least. Here’s what PETA President Ingrid Newkirk had to say about the NFL’s “wait and see” attitude in a statement to the media yesterday:

“Forget that unless space aliens were on Vick’s property putting up an invisibility shield, it is impossible that Vick didn’t know (let alone sponsor a fighting dog), that the house he built included designs for dog training facilities and that his relatives were fighting, kenneling, training, housing training equipment, and killing dogs there. There was a time when people under fire for corruption let alone criminal cruelty, resigned. That honorable moment has passed because of the Almighty Dollar. If he won’t do the right thing by stepping down until this is resolved (and I’ll put a sporting bet on his conviction), the NFL should suspend him. Is the new America only about money or do we still cling to some values? In the courts he may be innocent until proven guilty, and that’s fair and fine, but in professional or political life, we have to have a higher standard than “hey, keep raking it in until we see if he gets off.”

The protest was covered on ESPN, and you can watch an interview with PETA’s own Dan Shannon that took place during the demonstration here. 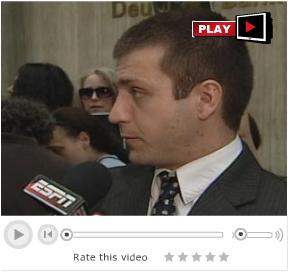 I’ll let you know as soon as there’s more news, but in the meantime, you may want to get your very own “Sack Vick” T-shirt. Love it. 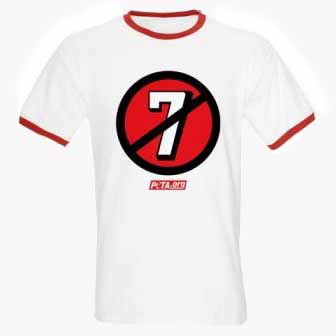