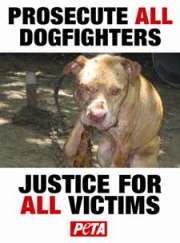 All day today, PETA protesters and hundreds of members of the public stood outside the U.S. District Court in Richmond, Virginia, to call for vigorous prosecution of Michael Vick and the three other men charged in this horrific dogfighting case. Although this story is the first glimpse for many people of exactly what dogfighting is all about, the real tragedy here is that the kind of abuse detailed in Vick’s indictment is as widespread as it is horrific. In the last year alone, PETA has responded to more than 14,000 calls and e-mails regarding other dogfighting and individual cruelty-to-animals cases. It’s great that there has been so much outrage over this case, and we’re certainly going to keep pushing to make sure that it is treated with the utmost seriousness by the courts—as well as by Vick’s sponsors and the NFL—but the next step is going to be getting policymakers and law enforcement officers to treat all cases of dogfighting and animal cruelty the same way that they have been prosecuting this case, which happens to be under scrutiny from the media.

The good news is that this is already beginning to happen on the federal level. According to a press release from Senator John Kerry’s office today, the senator has announced that he is “introducing legislation to finally eliminate dogfighting, which has been targeted by federal and state laws but by all accounts is more popular than ever.” A copy of the proposed bill can be found here, and you can read our thank you letter to Senator Kerry and expression of support for the bill here. 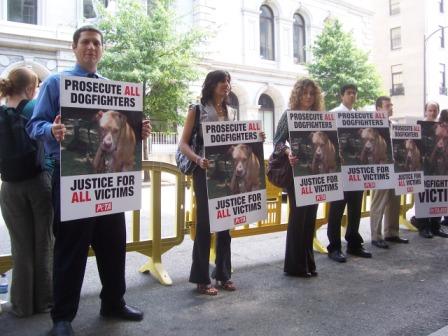