Update: We’ve just received word that the ominous-sounding “NIH Office of Research Integrity” is investigating this situation right now. I’ll let you know as soon as we hear the results of that inquiry. And the story was run in USA Today yesterday. You can read that article here.

OK, so there’s a horrifying part to this story, and there’s a part that’s just so mind-bogglingly stupid that it’ll make you cry. We’ll start with the horrifying part: A branch of the NIH is using chimpanzees as incubators to produce antibodies for anthrax, smallpox, and other pathogens in the event of a bioterror attack. For the animals used in these experiments, this means (among other things) excruciatingly painful bone marrow extractions and, apparently, complete isolation for as long as 20 years.

Now, here’s the dumb part: We already have treatments for those pathogens. Like, there are already antibody-based drugs for those pathogens pending approval by the FDA. Two companies have been contracted to provide antibody-based anthrax and smallpox drugs to the Strategic National Stockpile, and at least three other companies have antibody-based anthrax drugs in clinical trials. None of these drugs uses antibodies derived from chimpanzees (which means, incidentally, that the NIH could be violating the Animal Welfare Act, since non-animal therapies already exist).

What this all adds up to is that the NIH’s experiments are a) cruel, b) redundant, c) an unbelievable waste of resources that ought to be devoted to preparing for bioterror attacks. Which is not something you should be screwing around with, IMHO.

PETA President Ingrid Newkirk wrote to Department of Homeland Security Secretary Michael Chertoff this morning to point that out. You can read her letter here. 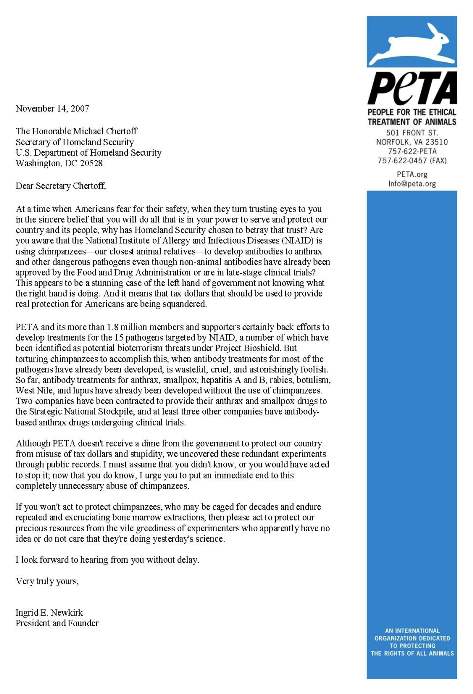