The University of Delaware (UD) has a budget decision on its hands: It can either financially punish over 800 faculty members and slash the salaries of administrators or ditch animal experiments after 20 years of failure. Does this even need a second thought?

At @UDelaware, experimenters are CUTTING rats’ skulls open, pumping their brains with drugs, and KILLING them.

We’ve ended a lot of these experiments, but need your help to STOP Tania Roth! https://t.co/LbLmcz1z08 pic.twitter.com/NtvNd4l0Wk

In response to a $65 million budget shortfall resulting from the COVID-19 pandemic, the university recently announced plans to implement a hiring freeze that could affect the school’s approximately 850 adjunct faculty members. The plan will also suspend all discretionary funding and trim the salaries of top university officials.

UD should start cuts with its biggest waste—animal testing.

PETA urged UD President Dennis Assanis to cut the university’s wasteful animal experimentation program, rather than suspending employment. The first to go should absolutely be Tania Roth’s cruel child abuse experiments on rats, which have not yielded any meaningful treatment for human children in over 20 years.

Roth claims that she studies child abuse. But her experiments are all about making sensitive, vulnerable rats suffer.

She has forced alcohol down the throats of newborn rats.

She’s deliberately terrified rats by repeatedly shocking their feet, and she’s taken newborns away from their mothers and given them to stressed rats who were unable to care for them.

In another experiment, she intentionally terrified pregnant rats by squeezing them into PVC tubes only 2.5 inches wide, three times a day for three weeks, and bombarding them with high-frequency strobe lights and white noise. Rats at UD have also been subjected to the forced swim test, in which they’re dosed with a test substance and dropped into a water-filled beaker, forced to swim for their lives while experimenters observe and record how long they struggle. 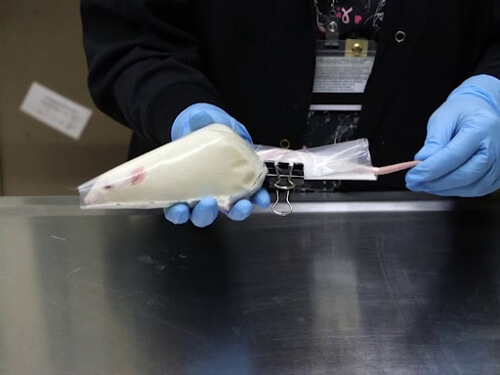 This image, taken from an article on rodent handling and restraint techniques written by University of Notre Dame staff, shows a restraint cone similar to the ones used by Roth in her experiment.

In a recent study, Roth surgically severed the lower thoracic spines of baby rats one day after they were born. She reported using hypothermia—chilling them in an ice bath to the point of unconsciousness—to anesthetize them and then giving them only one dose of pain medication following these painful surgeries.

How can the results of tests conducted on a different species living in an artificial environment ever be applicable to humans?

Sure, humans and rats both value their lives and have the ability to feel pain and experience joy. And yes, both species need social interaction and share a wide range of personality traits—in fact, rats enjoy being tickled, too!

But the physiology of humans is vastly different from that of rats. Even within the same species, caged, controlled animals react differently to stimuli than their counterparts living in natural habitats do.

Not surprisingly, the National Institutes of Health states that 95% of new drugs that appear safe and effective in animal studies fail in human clinical trials.

It’s irresponsible and cruel for UD to waste money on junk experiments that don’t benefit patients.

Federal documents reveal that UD has repeatedly violated federal animal welfare guidelines. Many of these violations have resulted in the suffering and deaths of dozens of animals.

According to the documents, one rat drowned during a forced swim test. In another incident, an experimenter ostensibly studying fetal alcohol syndrome withheld food from 23 rats, who lost nearly 15% of their bodyweight in just nine days. And in a third incident, 75 rats were killed after smoke from a nearby fire poured into the room where they were caged, potentially affecting experiment results. 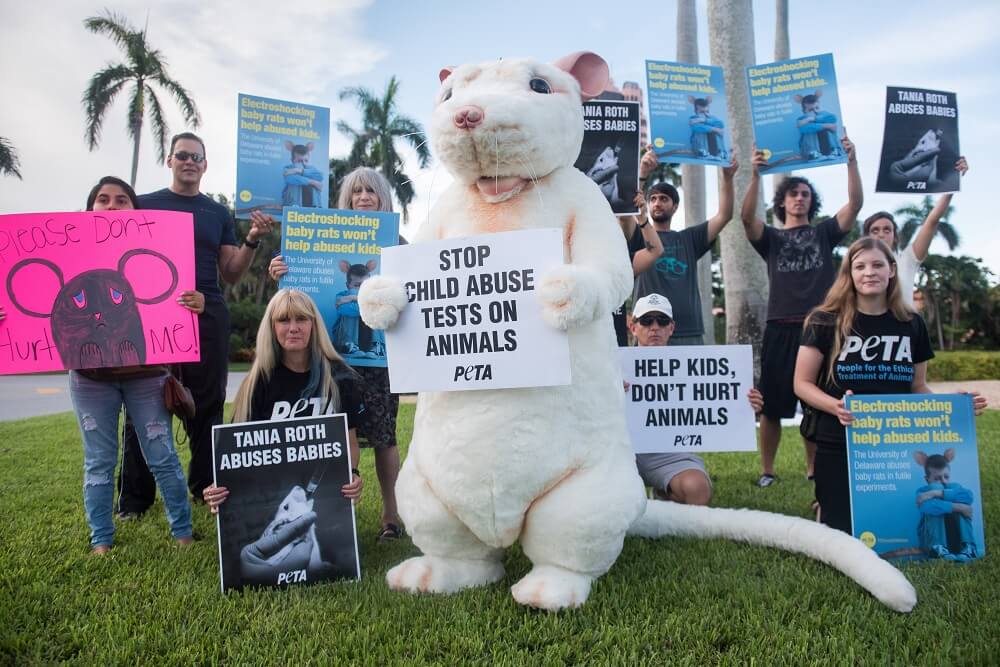 COVID-19 restrictions have brought animal experiments to a standstill, presenting an opportunity for schools such as UD to let go of these archaic practices and save money. The financial burden shouldn’t fall on university employees.

Roth’s experiments are irrelevant to human health but continue to receive public funding (in other words, your tax dollars)—help shut them down now!

Click on the button below to demand that the National Institute of Child Health and Human Development (NICHD) stop funding Roth’s experiments.