It looks like something out of the latest Saw movie, but then that’s what vivisection is all about. This stuff goes on behind closed doors all the time, and only occasionally do some of these hideous stories see daylight. This is the latest, from the folks at the University of Washington, who’ve already been slapped with a 12-month probation due to the sorry state of their labs. The shocking violations detailed in PETA’s formal complaints to the federal government are now the subject of an in-depth report by Seattle’s Komo TV:

“In a hidden part of the University of Washington campus, hundreds of monkeys live and die for research. They undergo experimental surgeries and tests until their usefulness is over. . But over the past year and a half, one group of researchers at the university has been at the center of a series of investigations for performing dozens of unauthorized surgeries on monkeys.”

This morning, PETA called for an immediate investigation into the use of state funds for experiments at UW that may have violated federal animal protection regulations. Among the barbaric experiments being carried out at UW, monkeys are having their skulls cut open, electrodes inserted into their brains, and wire coils implanted in their eyes. They’re restrained in experimentation chairs, with their heads bolted in place so that they can’t move while experimenters track their eye movements, and they’re deprived of food so that they’ll comply during tests. Komo TV’s exposé shows that this is just the tip of the iceberg: 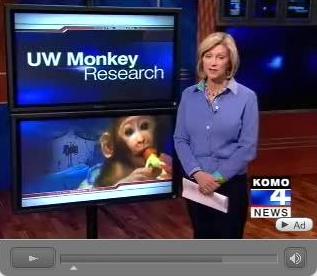 “UW is using millions of dollars of taxpayers’ money to torment monkeys and has broken nearly every rule in the book along the way. We’re calling on state auditors to reclaim any and all state funds that UW used in the commission of this laundry list of violations.”

The National Eye Institute is funding these experiments at the UW, and we’re asking them to stop. You can write to them about this issue here.