Two years after a whistleblower provided photos and video from inside a University of Alabama–Birmingham (UAB) laboratory showing the egregious pain and suffering of animals there due to inattentive, unqualified staff who kept shoddy records that they often falsified, PETA has the federal receipts to back the allegations up.

Newly obtained federal reports show that David K.C. Cooper’s xenotransplantation laboratory, where organs cut out of one species are implanted in another, is exactly the cruel clown show the whistleblower described back in 2020.

Among a litany of animal welfare violations, the whistleblower alleged that staffers in Cooper’s FrankenTransplant lab squirted Woolite laundry detergent on the open, hemorrhaging surgical wound of a baboon named Laja before parading her in front of the bigwigs whose money bankrolls the lab. 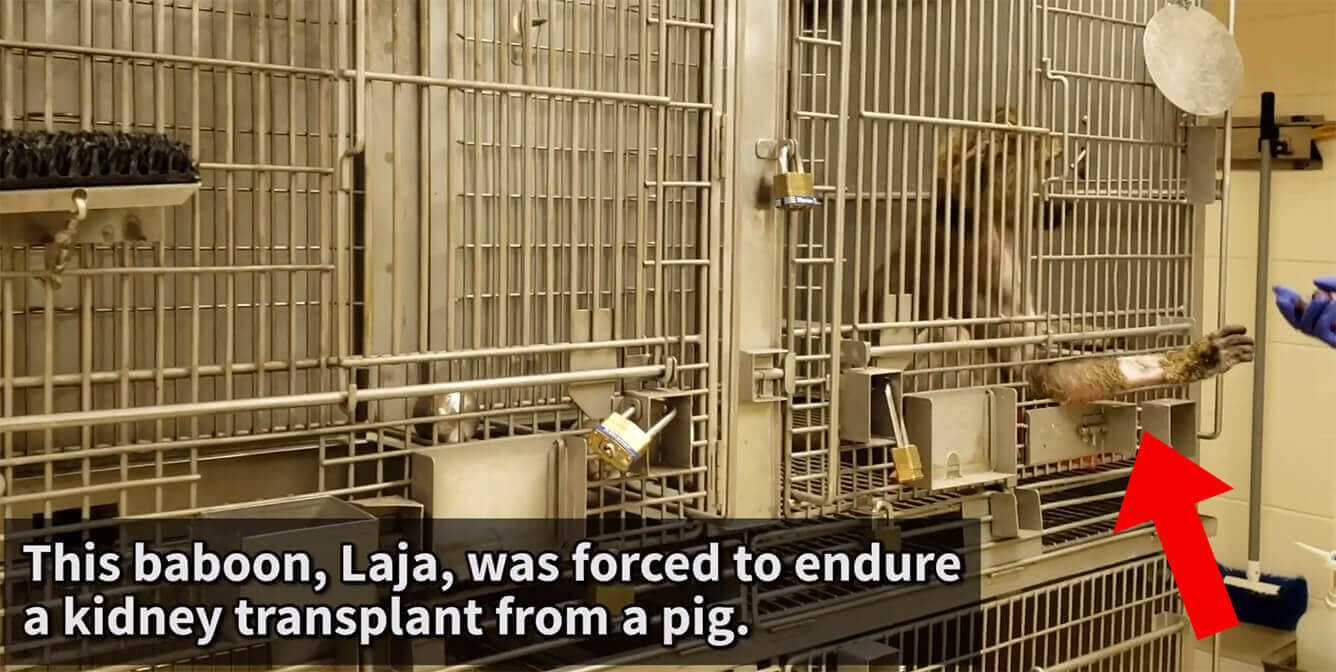 A pig kidney had been transplanted into Laja in January 2019 at UAB. By September, she was dead.

Federal inspectors appear to back up this claim of astonishing cruelty. The report states that the lab “purchased and used a detergent for cleaning topical areas on animals when a more appropriate clinical use product should have been obtained for this purpose” [emphasis added].

These same federal reports back up the whistleblower’s claim that staffers lied in their documentation and committed other serious infractions of animal welfare guidelines. One report states that experimenters in Cooper’s laboratory “falsified primate records” and used “inadequate restraint” when subjecting animals to painful experiments. Another documents that a UAB experimenter failed to maintain adequate records and may have administered expired compounds to primates, just as the whistleblower had said two years ago.

Among other serious documented problems, UAB experimenters failed to give 400 animals adequate pain relief in surgeries or other painful procedures. Here are two examples:

Experimenters at UAB—including in Cooper’s lab—have a documented habit of going rogue and conducting their own experiments, whether they’ve been approved or not. Federal inspectors documented the following:

Federal inspectors documented several instances in which UAB staffers were simply oblivious to the suffering around them. Staff neglect resulted in the deaths of 80 trout when the HVAC system for their tank malfunctioned and no one noticed. Separately, another 120 juvenile rainbow trout died after a mechanism in their tank malfunctioned. No one noticed that, either, reports say.

UAB received more than $327 million in taxpayer money from the National Institutes of Health in 2021, yet the school’s experimenters cannot—or will not—comply with even the bare minimum standards of animal welfare set forth in federal animal welfare regulations and guidelines. This is an abject violation of the public’s trust. The school must clean up its act and should replace animal experiments with modern, human-relevant research methods.

Xenotransplantation is cruel and pointless. Simple adjustments in government policy along with public education would yield an increase in organ donations for human patients without using animals as warehouses for spare parts.

Join more than 80,000 PETA supporters who have already demanded that UAB shut down Cooper’s FrankenTransplant lab.