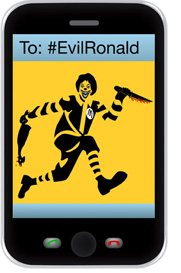 PETA has just launched a new Twitter contest that is sure to have Ronald McDonald shaking in his big red boots. To enter, just create a Twitter account named some variation of “Evil Ronald” and tweet the things you think the creepy clown would—or should—say. The account with the wittiest, funniest lines will be streamed on McCruelty.com and promoted on PETA’s Facebook and Twitter accounts.

For example, wouldn’t it be great if “Evil Ronald” told folks the truth about how McDonald’s suppliers slash conscious chickens’ throats and scald them to death in tanks of boiling water? Sorry, the McNugget Patch it ain’t, kiddies.

Be sure to include the hashtag #EvilRonald so that we can follow your tweets. You have until May 9 to show off your cruelty-crushing candor, so get started taking down the clown today.
Written by Michelle Kretzer