PETA is asking the U.S. Fish and Wildlife Service (FWS) to seize animals from Karl Mitchell, whose repeated, flagrant violations of the Animal Welfare Act (AWA) have left us reeling.

The U.S. Department of Agriculture (USDA) rarely yanks exhibitor’s licenses, but Mitchell’s license was revoked more than 10 years ago and he was fined $27,500 for violations, including filthy living conditions, failing to provide animals with veterinary care, failing to provide wholesome and palatable food and water or adequate space and shelter, and withholding water as a training technique.

On top of his lengthy list of noncompliances, Mitchell also shot and killed a tiger who escaped his control during transport in 2002. He continues to flout the law, and last year, the USDA issued a third cease-and-desist order against him and assessed fines of almost $70,000 for continuing to exhibit exotic animals without a license. 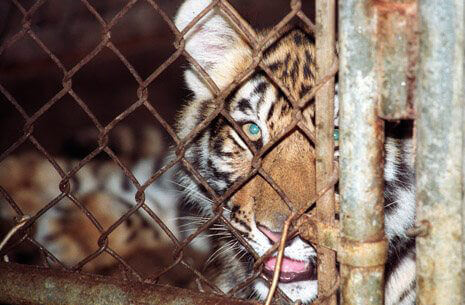 It seems clear that Mitchell is knowingly violating the Captive Wildlife Safety Act (also known as the “Lacey Act”), which gives the FWS grounds to confiscate his animal “inventory.” We’re also calling on the USDA to file criminal charges against Mitchell, given his repeated violations of the AWA despite multiple cease-and-desist orders.

Please e-mail the FWS to ask officials to seize Mitchell’s animals and e-mail the USDA to demand an investigation.