As Volkswagen comes under fire for cheating on emissions tests, PETA is pointing to a far greater source of pollution: the meat industry. The group is negotiating with advertisers near the company’s Herndon headquarters to erect a billboard that depicts the VW logo made out of animal flesh and proclaims, “How About an Even Bigger Emissions Scandal? Eating Meat Destroys the Climate!” As the billboard points out, producing 1 pound of meat results in the same amount of emissions as driving 33 miles in a VW Golf.

A staggering 51 percent or more of global greenhouse-gas emissions are caused by animal agriculture, according to a report published by the Worldwatch Institute. A United Nations report further concluded that a global shift toward a vegan diet is vital if we are to combat the worst effects of climate change. 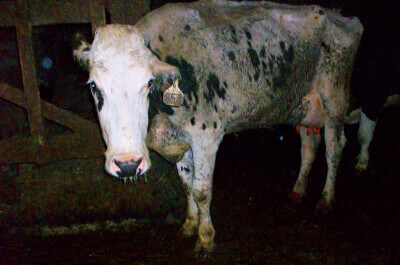 The meat, egg, and dairy industries are among the top contributors to the planet’s most serious environmental problems, including destruction of the rainforests, water shortages, air and water pollution, and loss of biodiversity.

PETA also plans to run the billboard in “green” cities across the country.

Order PETA’s free vegan starter kit and do your part to start saving the planet and animals today!