Beachgoers flocking (geddit?) to Panama City’s crowded beaches had something far more interesting to gawk at this weekend than women in skimpy bikinis, as an airplane hired by PETA flew overhead, towing a banner that read, “Boycott KFC Cruelty.”

Now if you’ve been following PETA campaigns for the last, oh I don’t know, 7 years or so, you’d know that this is a huge success considering we spelled all the words right this time around! Way to go, literate banner-manufacturers! (Yes, we got our money back when one banner company misspelled “dangerous”)

After reaching a landmark animal welfare agreement earlier last month that will mean better living and dying conditions for all chickens killed for KFCs in Canada (the new faux fried chicken sandwiches offered at most Canadian KFCs are even causing us to celebrate that today is Canada Day), PETA is unleashing its “air force” to turn up the heat on Canadian KFCs’ lousy, mean U.S. affiliate. Celebrities from Ryan Gosling and Pam Anderson to Sir Paul McCartney and Russell Simmons have all spoken out against KFC’s extreme abuse of chickens, but this is the first time that an airplane has “spoken up” for chickens.

Check out this picture of our superhero for chickens in action! 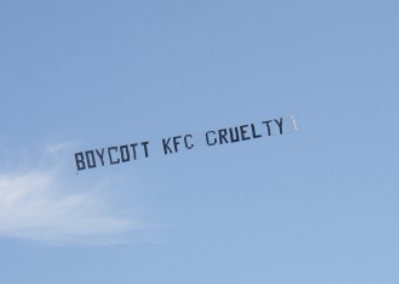