My buddy Pulin, who works on the college campaign for those fast-living trend-junkies over at peta2, was in Panama City last week to try and throw a little bit of social responsibility into the potent mixture of drinking, partying, and boys and girls gone wild that is College Spring Break. You know: Sex, drugs, rock and roll, compassion for animals—all that good stuff. Anyway, a funny thing happened once Pulin and his gang brought out the chicken costume and began passing out leaflets about KFC. A probably well-intentioned but slightly over-eager dude in the crowd (pictured below) decided it would be a good idea to blindside the chicken (actually a University of Florida student named Beth) and tackle her to the ground. Beth was unhurt, but the police officers who witnessed the assault were relatively peeved about the whole thing: 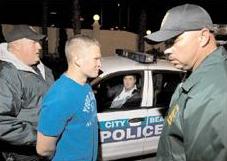 The story has a happy ending though. Pulin and Beth decided that they wouldn’t press charges if the tackler, who turned out to be a fairly affable fellow named Dave, would agree to get in the chicken costume himself and spend some time holding a sign to encourage people to stop eating animals. Dave was more than happy to oblige. The story made the front page of the Panama City News Herald, and you can check it out here.