We could have called this “Reason #782 to Go Vegetarian,” but you probably wouldn’t have clicked on that. And no, we’re not just flashing the sex card to try to get your attention (OK, we were), but this is dead serious—as dead, apparently, as the sperm of obese men.

Here’s the scoop: Earlier this week, an article about researchers at the University of Aberdeen in the U.K. reported that “obese men have worse sperm than normal-weight men.” The researchers analyzed sperm samples from more than 5,000 men and found that, in the words of the news article, “[f]at men had a 60 percent higher chance of having a low volume of semen” and “a 40 percent higher chance of having some sperm abnormalities.”

Monty Python told us that every sperm is sacred, but apparently, some sperm is abnormally sacred. Who knew?

So what does this have to do with dietary choices? Well, loyal readers of The PETA Files will recall that vegetarians are slimmer than nonvegetarians, weighing on average 20 to 30 percent less than their meat-eating counterparts. In other words, meat-eaters tend to be heavier than vegetarians, are more likely to be obese, and are more likely to have inferior sperm. Add to this the fact that the saturated fat and cholesterol that clog the arteries of meat-eaters clog arteries leading to all the organs (including what Steve Martin called that “special purpose” one), and it’s no wonder that this lovely lady hates men’s guts:

And that this lovely woman seems, well, like she’s particularly fond of her vegetables! 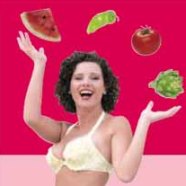