It’s time for one of those “OMFGWTF?” moments—this one brought to you exclusively by the fine folks over at Sony. Apparently, as part of a promotion for a new game (which I’m not even going to mention here because I have absolutely no desire to help them promote it), they threw a party which featured a freshly slaughtered goat as the centerpiece. According to the Daily Mail, “guests at the event were even invited to reach inside the goat’s still-warm carcass to eat offal from its stomach.” Setting aside the obvious question about whether this qualifies as the single lousiest party in history, how did this vicious little idea ever get past the concept stages? I’ve always sided with the video game industry against the Jack Thompsons of this world who are out to make a name for themselves by blaming gamers for all of society’s problems, but when a company of Sony’s stature goes out of its way to commit an act of senseless violence for a promotion, you have to start questioning whether they have any concern at all about the message they’re sending to fans. Sony is evidently recalling the entire 80,000 print run of the PlayStation magazine in which this story featured, though it’s frankly a bit late for the victim of the stunt at this stage. 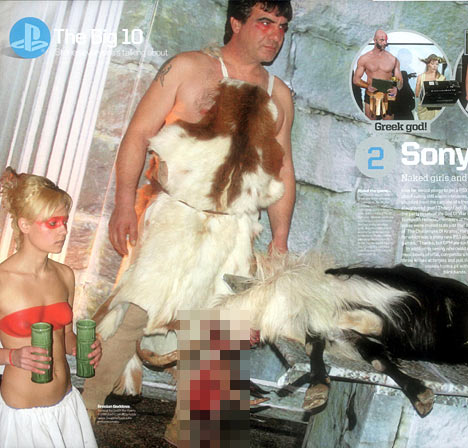