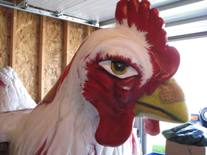 Less than a month ago, we sent requests asking permission from the Louisville Department of Public Works to place our crippled-chicken statue, which was designed by renowned cartoonist Harry Bliss, on public property.

I should clarify—we submitted six separate applications, asking for our statue to be placed at six different locations, to nix any issue of public versus private property. We were pretty confident that we’d covered all the bases.

We’ve finally received a response. Apparently, Louisville has placed a 45-day moratorium on issuance of the very type of permit we requested.

Coinkydink? Methinks not. I suspect that Louisville officials and KFC don’t want any attention drawn to the horrible abuse that millions of chickens suffer at the hands of KFC’s suppliers.