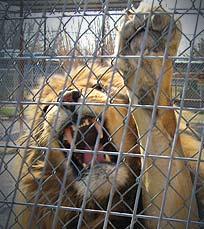 He runs a place called the G.W. Exotic Animal Sanctuary. You may remember the name because we did an undercover investigation there a few months ago. The place is a total hole, with more than a thousand animals, including tigers, lions, cougars, bears, primates, wolves—you name it. The shady joint bills itself as a “sanctuary” for rescued animals, but in reality the principal reason it exists is to line the pockets of the owner Joe Schreibvogel. They drag baby animals to malls for photo ops, the animals are punched, kicked and starved to keep them in line, and unlike any real sanctuary, they are constantly breeding the animals to ensure a never-ending flow of “cute” babies.

Anyway, the place is a pit and should be shut down. But that’s not the point of this post. Really. The point is that on the joint’s website, they boast:

“The G.W. Exotic Animal Park Now has Sponsors From 54 States and 37 foreign countries.”

54 states, huh? I didn’t know they even had that many! Must be a hell of a place. If these guys are anywhere near as good at animal care as they are at geography, maybe there’s nothing to worry about after all.