Companies selling wool may tout words like “sustainable” or “local” in their branding, but as new video footage shows, when it comes to animal welfare, these buzzwords mean nothing.

In the Nevada desert, PETA eyewitnesses documented freshly shorn sheep being loaded into trailers bound for a location hours away, in California. The sheep are used by Bare Ranch, which claims to produce “local” wool using “sustainable” methods with “respect” for animals.

See for yourself what the sheep endured, and then take action to help stop this kind of abuse.

Bare Ranch workers shoved, hit, pulled, and pushed sheep while loading them into trailers. They struck the animals on the head and face, jabbed them with a paddle and a pole, kicked at them, and kicked the fencing next to them to frighten them into moving forward.

Sheep tried to jump or climb over each other in fear as they were herded toward the trailers. A few collapsed to their knees. And at least two had bloody wounds on their hindquarters, probably from fast and rough shearing.

Hitting, kicking, or otherwise abusing animals is never acceptable—especially when Bare Ranch claims to have “respect” for them—but during the eyewitnesses’ brief visit to this ranch’s operation, the animals were repeatedly subjected to such treatment. 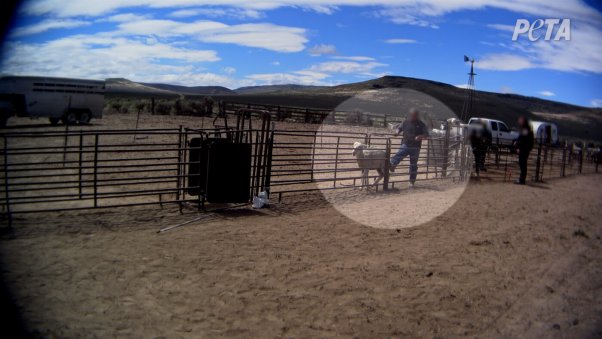 Terrified Sheep Lassoed by the Neck and Yanked to the Ground

Three sheep who had gotten loose were pursued by workers and dogs. Two of the exhausted, panting animals were chased, lassoed by the neck, and roughly yanked to the ground. Bare Ranch’s co-owner said that workers were “wasting time” trying to recover three sheep and that the animals should have just been left in the desert. 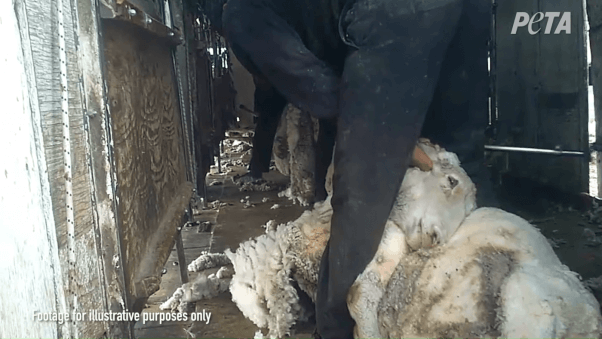 The Wool Industry Hurts the Environment, Too

Data shows that because of the greenhouse-gas emissions created in its production, wool has a more significant impact on climate change than the majority of its synthetic and other vegan counterparts.

No matter what farming methods are used to raise sheep, they’re never truly sustainable, but many eco-friendly vegan options—including organic cotton, coconut fiber, tree fibers, recycled bottles, biodegradable Tencel, and hemp—are available. Hemp is even carbon-negative, meaning that it draws carbon dioxide out of the atmosphere.

There’s no such thing as “humane” wool. PETA has now released 12 exposés of 100 wool-industry operations on four continents revealing that sheep are mutilated and abused for their wool and sometimes even skinned alive.

Always check the labels on sweaters, other garments, and blankets before buying them. For the sake of sheep and our planet, if a label says “wool,” please leave the item on the shelf.

Learn How to Shop Vegan With PETA’s Clothing Guide