Patrons of a California pet-store chain were appalled when they saw black-tipped reef sharks displayed in small tanks. As is the case with most captive sharks, these animals were swimming into the tanks’ glass walls, resulting in chronic injuries. 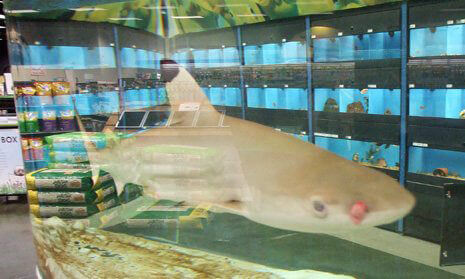 After PETA was alerted to the sharks’ plight last summer, we convinced the chain  to release one injured shark so that the animal could receive veterinary care and be given a new home; the chain also said that it would not place sharks in new stores. But after another shark was injured a couple months ago and PETA posted an action alert on its website, the pet store made the compassionate decision to release all its sharks to more species-appropriate facilities.

Sharks naturally roam for miles in the ocean. In captivity, they often exhibit neurotic behaviors as a result of stress, including repetitively swimming into the sides of their tanks. Confinement also deprives them of engaging in natural behaviors such as foraging for food, choosing mates, raising their young, and exploring reefs.

Please, don’t patronize any pet stores, aquariums, or other businesses that sell live animals or use them as “props.”