Following reports from whistleblowers that a whitetip shark died during the production of a Kmart commercial, PETA is urging the chain to investigate the incident immediately and to adopt a policy against using wild animals in its ads. According to the whistleblowers, the 5-foot shark was flown from New York to Los Angeles on March 6 and placed in a small above-ground pool in Van Nuys, California. Human actors repeatedly jumped in and out of the pool during the shoot, which likely caused the animal to stress.

PETA was told that The American Humane Association (AHA), which approved the script and was on set, allowed shooting to continue for about an hour after the shark began exhibiting signs of stress. The shark was then reportedly taken out of the pool and died later that day. 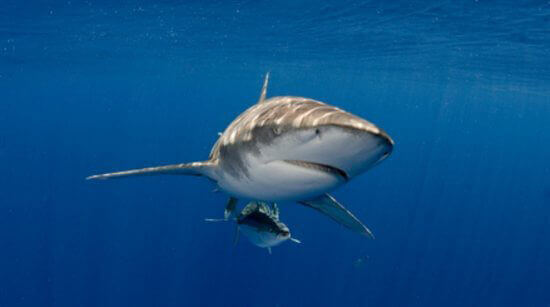 Sharks are delicate animals who, in captivity, require a highly specialized and controlled environment. Sharks have exceptional sensory systems that allow them to detect minute electrical fields and sense low-frequency sounds and vibrations. The noise and chaos of a commercial shoot is a very stressful environment for these sensitive animals.

Animatronic and CGI sharks have been in use for nearly 40 years in films such as Jaws, Bait 3D, Deep Blue Sea, and Shark Night. In addition to urging Kmart to adopt a policy against using wild animals in its commercials, PETA is contacting the AHA regarding its failure to protect the shark.

One animal death is one too many.