Sex and the City. People either love it or hate it. And since the series has ended, there has been no shortage of drama between the show’s loyal fans and its detractors, and also between the actors themselves. But believe it or not, jumping into that fray isn’t the point of this post.

The movie version of Sex is filming right now, and this picture is making its way all over the Internet. Apparently, there is a scene in the movie where people who call themselves PETA tell Samantha Jones (Kim Cattrall’s character) what they think of her choice of outerwear, as they throw paint on her. Here’s the photo that’s been doing the rounds of the Sex and the City fansites today, so you can judge for yourselves: 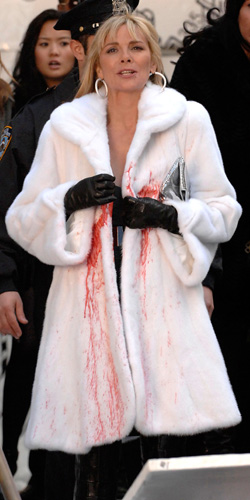 And for the record, PETA doesn’t throw paint on fur wearers. What we suggest is giving them an earful while handing them one of these nifty anti-fur business cards, or maybe encouraging them to display one of these wonderful little warning labels: 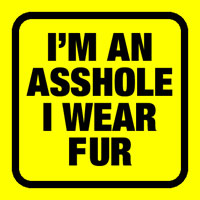