For being the first Canadian parliamentarian in history to introduce a bill to phase out Canada’s cruel commercial seal slaughter and for his tenacity in promoting the legislation in the Senate, Sen. Mac Harb has been named PETA’s first-ever Canadian of the Year. 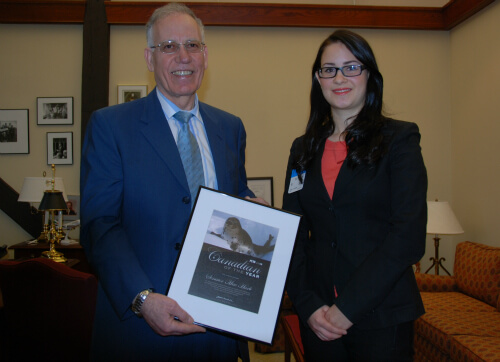 A native of Lebanon, Harb moved to Canada to attend the University of Ottawa. In 2003, he was appointed to the Canadian Senate after serving in Ottawa city government and in the House of Commons. During his tenure as a member of parliament, he held prominent positions overseeing matters of international trade, making him especially qualified to understand the issues surrounding the seal massacre on the global market. No fewer than 33 countries have banned the trading of seal products.

In 2009, Harb introduced a bill to limit the East Coast seal slaughter to people with aboriginal treaty rights, but no other senator would second the measure. As the lone voice for the seals, Harb was brave, but what he did then was even braver—he kept at it, with patience and perseverance. He introduced the measure again in 2010. This time, the motion was seconded, but other senators stopped it from being debated.

So, on May 2, 2012, Sen. Harb again reintroduced Bill S-210 to phase out the commercial seal massacre. Finally, the Senate unanimously agreed to consider the bill. On June 14, as Sen. Harb moved for a second reading of the bill, opening it for debate in the Senate, he set forth his case. Here are some excerpts from that speech:

Science will show that it was government inaction and misguided action on the fishery that was responsible for the depletion of the cod stocks and its continuing struggle to recover. The seals are not responsible. …

Instead of working against animal welfare groups and environmental organizations, let us join hands with them to share ideas and resources and find answers that will actually help the communities in Atlantic Canada and in Canada’s North. Answers will ensure that Canada fulfills its national and international commitment to sustain marine biodiversity and to ensure we have healthy, safe and prosperous oceans now and in the future.

PETA is enthusiastically supporting Sen. Harb’s measure and has garnered the support of celebrities such as Pink, Ellen DeGeneres, and British Columbia native Pamela Anderson. Other concerned and compassionate Canadians can join PETA in honouring Sen. Harb by encouraging their senators to support Bill S-210 today.