Fatty (adj.)
1. Consisting of, containing, or resembling fat: fatty tissue.
2. Pathology. Characterized by overproduction or excessive accumulation of fat.
Are you really going to eat that fatty, diseased liver, you sick freak?

Alright, now that we’ve got the definitions out of the way, here’s the big news: Phat Farm clothing and Def Jam records founder Russell Simmons just approached the Chicago City Council on PETA’s behalf to urge them to oppose efforts (funded by what may well be the sickest, most unethical industry on the planet) to repeal the city’s ban on fatty duck liver, or foie gras. Here’s what Russell had to say to the Council:

“Cruelty is wrong, regardless of whether the victim is a child, a dog, or a bird. Let’s come together to oppose all cruelty and injustice. I am asking that you support keeping this compassionate law in place—a law that Chicago can be truly proud of.”

You can check out Russell’s letter below, and for a little taste of what goes on in the foie gras industry that’s currently pressuring Chicago to repeal its ban, check out this story about 15,000 ducks who burned to death this week at a Hudson Valley Foie Gras factory farm. When asked for comment, Hudson Valley owner Izzy Yanay expressed his deep regret about how much money this is going to cost him. Anyone else feel like these people should be out of business ASAP?

Thanks, Russell, for everything that you do. 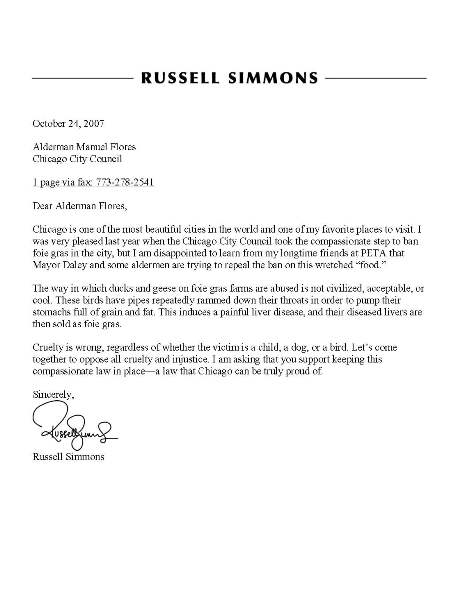