So a while back, I posted an entry on these here PETA Files calling out the Ross University School of Veterinary Medicine about numerous photographs we had received documenting the mutilation of animals who were forced to undergo multiple surgeries before being killed and cut apart at the university. Sounds like a pretty reasonable point for an animal protection organization to raise with a veterinary school, but our letters to the university met with enough resistance that we decided to launch an action alert encouraging people to contact the school about the issue.

The good news is that, after a few weeks of back and forth, the Ross folks cancelled all invasive and terminal dog surgeries, something that we—and a whole lot of dogs—were extremely grateful for. As my friend Shalin points out in his recent letter to the local newspaper, it’s totally cool by us if they want to claim that this development was a coincidence and had nothing to do with our requests—as long as they’re making the changes, that’s the important thing.

But we’re not quite finished yet. Ross is still conducting invasive and terminal surgeries on donkeys and sheep, and that needs to stop, like, ASAP. Plenty of veterinary schools are able to teach students to help animals without killing them first, and Ross should join that club sooner rather than later. They’ve already taken an important step in the right direction. I’ll keep you posted on how it all turns out. 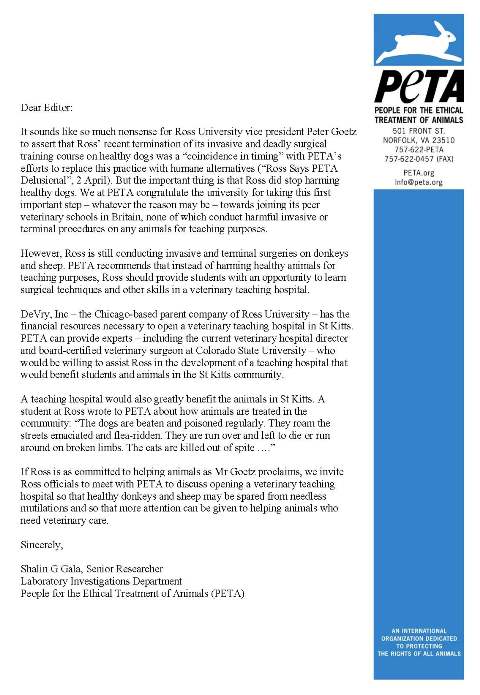