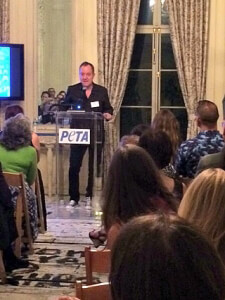 In the summer of ’79, everyone was ski-doo-be-dop-ing to a song about a beach party replete with crustaceans and unusual fish. But take note: In “Rock Lobster,” the animals were joining the party, not being eaten. And on the song’s 35th anniversary, The B-52s’ Fred Schneider threw another celebration to ask a new generation of fans to let lobsters rock on.

Fred hosted the soirée at the New York City home of PETA supporter and artist Domingo Zapata, who’s known for his much-buzzed-about eclectic celebrations. As the crowd, including HLN’s Jane Velez-Mitchell, chowed down on catering from vegan hotspot Candle 79, such as petite cannoli and almond shortbread cookies with chocolate mousse, Fred explained what made him stop eating animals as a child. He shared that story with our readers recently:

“I grew up in New Jersey, and every summer, we visited relatives near Toms River. They had a boat, and we all would go crabbing out in the bay. We always caught a lot of crabs and brought them back to cook. I was 4, and I watched as they started putting the live crabs in a big pot of boiling water. I was horrified and would never eat crab again.”

And Fred continued working to stop cruelty to crustaceans. He even turned down a big offer from a soup company that wanted to use “Rock Lobster” to promote lobster bisque.

So of course, at the “Rock Lobster” party, Fred screened his new PETA exposé of the seafood industry, which he hopes will resonate with people. 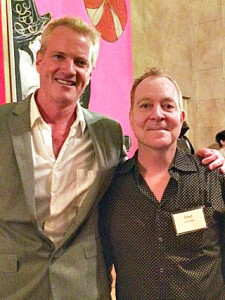 Charming and exuberant as always, Fred told the crowd, “I’m a PETAholic!” From his catalog of unforgettable music to his lifetime of animal advocacy, it’s pretty clear how much Fred Schneider rocks.