Barbaro, the horse who suffered a catastrophic leg injury during the 2006 Preakness, was euthanized yesterday morning. He had been in poor condition for more than 8 months after the accident, and it is a small mercy at least that his suffering is finally over.

Of course, in all the outward show of regret about Barbaro’s cruel fate from within the horse-racing industry, everyone conveniently forgot to mention the fact that this kind of misery comes standard for horses used in racing. While the world watched to see what would happen to Barbaro, countless other horses continued to die on the tracks, and tens of thousands more (including thoroughbreds) were sold for slaughter—their meat used in cat food or sold to European countries for human consumption.

The story is being pitched as an unexpected accident that shocked the country, but the truth is that Barbaro’s tragedy is a very public reminder of the plight of racehorses everywhere and the cruel fate that awaits so many victims of the horse racing industry. 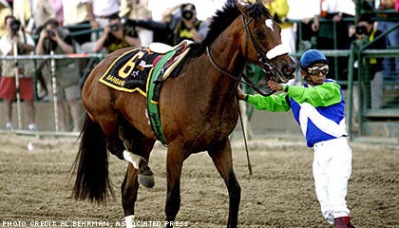