Now that the Olympics are over, it’s impossible to turn on the TV or open the newspaper without seeing something about the Democratic National Convention. What’s going to happen, what’s going to be said, who’s going to be there …

Our pigs don’t have anything to say about any of the candidates, of course—they’re tackling a global issue: meat!

The pigs—who are circling around the convention center and picking up passengers in their cherry red convertible—are calling for a federal excise tax on meat. (Look out for them next week as they cruise around the Republican National Convention!) Why? Well, there’s a “sin” tax on cigarettes, alcohol, and gasoline. Why shouldn’t there be one on meat, which is bad for both your health and the environment?

Our Senior VP Dan Mathews (who, as we know, is fond of wearing costumes) is among the protesters. He sums up the reason our pigs are calling for a 10-cents-per-pound tax: “The impact of the meat trade is as devastating to our health as the tobacco and alcohol industries put together—and even more so to the environment. Slapping a tax on meat would save countless lives—and not just those of animals.”

Check out our pigs below—and if you’re concerned about the health and environmental consequences of eating meat, check out GoVeg.com for a free copy of PETA’s “Vegetarian Starter Kit”! 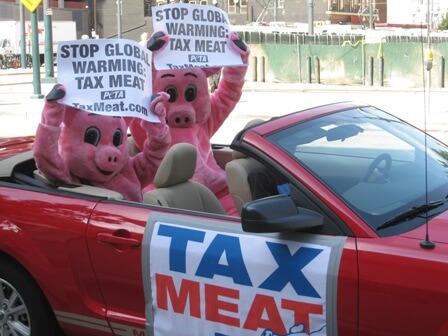 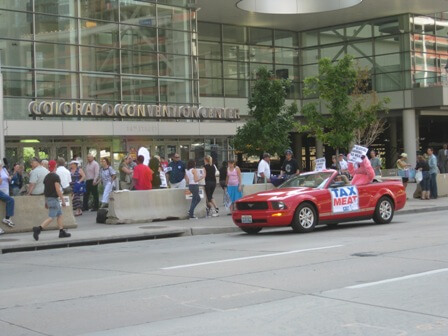