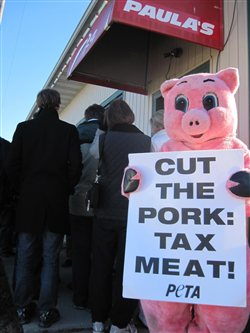 Things got raucous at the caucus when a PETA “pig” hit the campaign trail in Iowa to ask presidential candidates to “cut the pork: Tax meat!” Michele Bachmann and Rick Santorum got an eyeful of our pig, who stood outside the restaurants where they were meeting and greeting.

But Rick Perry got a handful. When the presidential hopeful promenaded past the pig, he gave her a big high-five and agreed, “Yeah! Cut the pork!”

The swine opined to point out that because of meat’s devastating impact on people’s health and the environment, it should be accompanied by a “sin” tax to offset the costs—similar to the taxes on alcohol, tobacco, and gasoline.

No matter who wins the election, (and of course, as a charity PETA takes no position in support of or opposition to any candidate in any party), next year’s prez could use this idea to save the economy—and lives.