Last month, a resident of Capitan, New Mexico, let his four dogs outside, and two of them took off running after a deer. When they didn’t come home, he frantically posted fliers around the area. On November 29, he received devastating news: A hunter had discovered the dogs two weeks earlier, dead in the woods. When the man took their bodies to a veterinarian for a necropsy, he learned that someone had likely dragged the dogs until their necks broke. 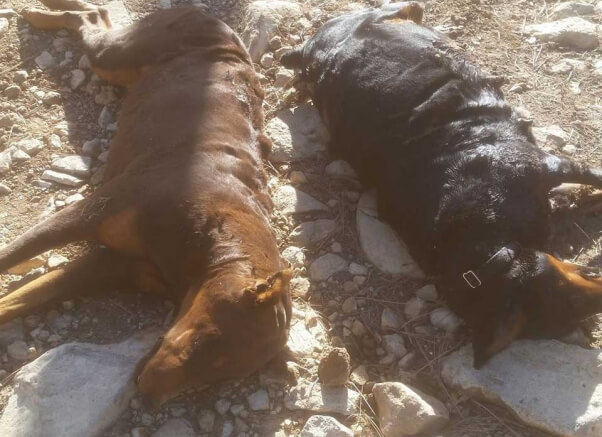 Police are investigating but have yet to make any arrests in the case, prompting PETA to offer a reward of up to $5,000 for information leading to the arrest and conviction on cruelty-to-animals charges of the person or persons responsible for the dogs’ deaths.

Anyone with information about this case is urged to contact
the Lincoln County Sheriff’s Office at 575-648-2341.

It takes a dangerous person to commit such a heinous act. According to leading mental-health professionals and law-enforcement agencies, perpetrators of violent acts against animals are often repeat offenders who pose a serious threat to the community at large—humans included. Anyone with information about this case should come forward immediately so that whoever killed these dogs can be held accountable before someone else gets hurt.

Remember: Dogs and cats should never be allowed to roam unattended outdoors, where they may be abducted, attacked by other animals, or abused by cruel people.

Will you please share this information with your friends, family members, and social media followers? It may be the only way to apprehend those responsible for this crime.