SeaQuest aquariums—which are owned by Vince Covino—are plagued by issues: animal deaths, legal violations, injuries to employees and members of the public from direct contact with animals, and customer reviews that’ll make your jaw drop (and not in a good way). So if you’ve ever considered visiting a SeaQuest location or any other Covino-operated aquarium, do yourself and animals a favor: Learn from these TripAdvisor and Yelp reviewers.

At SeaQuest Folsom in California, an otter was apparently whacked with a broom.

“This place smells the animals look tortured and starved. I’m not a fan of this place. Took my family and we ran out of there. … We will never go back. Also we saw an employee wack an otter with a broom. … If you love animals you will hate this place,” a reviewer on Yelp declared. 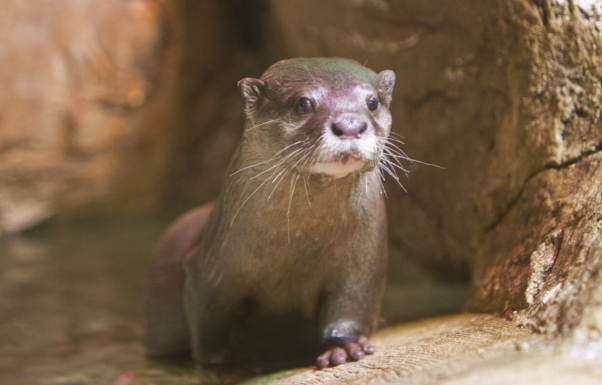 “Thought I would take our children. Big mistake! … We could just sense the sadness of the animals in the enclosures and the poor tortoises were taking abuse from kids touching and grabbing at them,” another visitor exclaimed on TripAdvisor. “No monitoring around the ray touch pond which was so cringe worthy that we had to walk away. This place is in it for the monetary gain not the true education and sanctuary purposes. We will not support this establishment again and encourage others to [avoid it] also. How it hasn’t been shut down yet is beyond me!”

“If you love animals and are fond of them, you won’t want to go here. … You’ll see social animals living solitary, and a capybara in the Asian exhibit. Spoiler: they are not from Asia. The employees working the floor won’t, however, know that. Their water is cloudy and indicative of bacterial bloom. The fact I paid to take my family here even once makes me sick to my stomach,” admitted one reviewer on Yelp. “I still believe in being a good global citizen and respecting the other creatures on the planet and this place clearly doesn’t feel the same.” 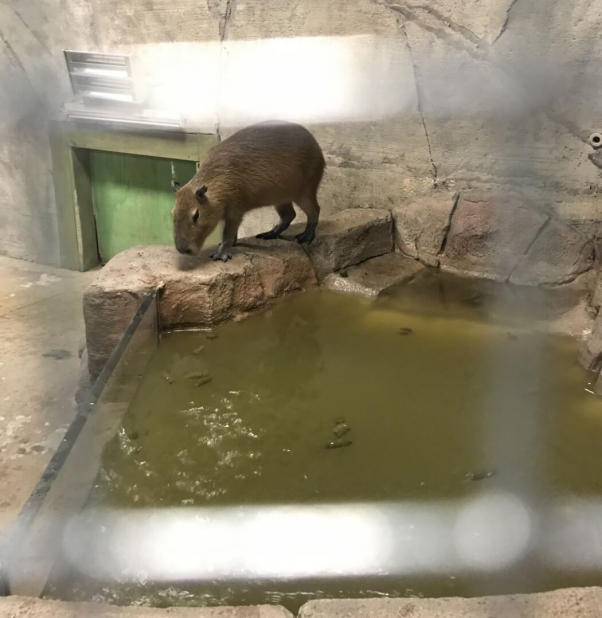 “This attraction was one of the worst I have seen. It was dirty and not well kept. The animals looked stressed, especially the sloth. People are allowed to reach into the tanks and ‘pet’ and feed the stingrays, etc.,” a reviewer called L’August H warned folks on TripAdvisor. “So basically, the animals are harassed and overfed while under fluorescent lights all day and in dirty water. This Seaquest has failed multiple animal welfare inspections. Just google them and see all of the bad press and reviews.”

It’s as if that reviewer took the words right out of our mouth.

Life appears no better for the animals stuck in Connecticut’s SeaQuest Trumbull.

“ZERO STARS,” Kelly B. began her Yelp review. “It was just sad to walk through seeing dirty tanks and dead animals, luckily my daughter is too young to understand what she was looking at. Very expensive for what it is. All the land animals are surrounded by plastic, weird to see sloths, an animal that lives … in trees, in a small cage with no vegetation. I refused to buy anything from gift shop because I did not want to give any more money to this company.”

“These animals are suffering immensely. No natural light, unfit and filthy habitats constantly subjected to people yelling, poking and prodding them. Innumerable animal deaths. If you have an ounce of compassion you will be disgusted by what you see,” warned one TripAdvisor reviewer. “These animals are being exploited for profit. It is a deeply disturbing experience.”

One reviewer likened Minnesota’s SeaQuest Roseville to a horrifying basement.

“From the minute I walked into this establishment, I was HORRIFIED by the pens these animals were displayed on,” Sabrina K. posted on Yelp. “To start, the Capybara’s pen was tinier than a handicap stall and not even half of it had grass the other was concrete. … The displays looked like they havent been cleaned for 5 years even though this place has been open for a month. Then you go downstairs to the actual aquarium …. I felt that I walked into someone’s basement. There were tanks everywhere … Kids could stick their fingers wherever they want and could possibly hurt the animals. There was no one on most of the fish sites to assist kids or tell them how to touch/feed these creatures. It was appalling. The stingrays were scratch up clearly from nails, and the tank was so dirty I had to stand and look over the wall to see anything. … I would NEVER bring my children to see how these animals were treated, and I will never WASTE my money on this place. Do yourself a favor and save yourself the time.”

“I would give them zero stars if I could. This was the saddest excuse for an animal experience I have ever seen. The animals looked miserable and crowded. The place smelled like a fish store. They are ALL about making money. Any excuse to charge you for something they took. Exploitation is the only word that came to mind. There was this horrible bird exhibit that put rowdy children in an enclosed room with birds who just wanted to get away from them in addition to the tiny clouded stingray tank they let people swim in that was hardly big enough for the stingrays alone. I went here without doing my research so I looked into them after and found alot of similar feelings to the ones I had,” Lisa warned on Yelp. 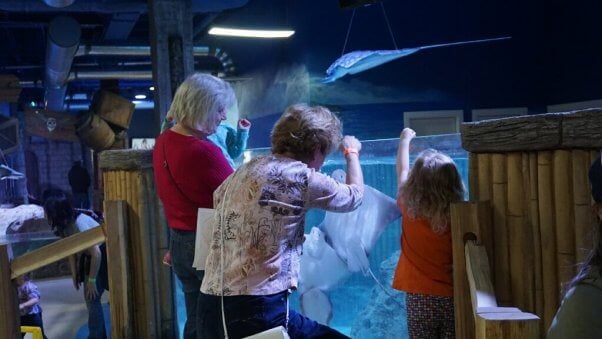 Sara K. agreed, adding, “This place is so disgusting! I was told by a friend to go here because it would be great for my active toddler and for educational purposes. … [T]he place is absolutely disgusting, and I regret going there because the animals looked so unhappy and were in unkempt conditions! I did further research after leaving that place and found out an otter just died there last week, and I could see why many animals die there! The workers do not supervise the animals, and they are in open areas. Any kid could just come and torture animals without the employees even knowing it. The otters were in a small area filled with baby toys and a dirty wet cloth! I am forced to give one star, but I would never go back to this place! I left feeling depressed and disgusted!!!! I hope this place shuts down!”

“Please do not go here. My husband and i stopped in to take a break from shopping and were HORRIFIED of the conditions of the animals,” warned one shopper on TripAdvisor. “My heart broke for every animal (with no shelter to hide from the public) being grabbed at with no employee in sight. We saw a dead seahorse, the iguanas being grabbed and trying to be held by VERY infant children, the ducks enclosure water was extremely murky, the Silky Chicken enclosure is a very small dog house on top of a high lifted platform and the poor Scarlet Macaw’s tail was completely banged up due to being held in a too small cage and the poor thing was sitting like a stone—not moving at all. It looked terrified and uncomfortable. Horrible experience all together. I spoke with the front desk after our walk through and the girl said ‘we are still making improvements’. I highly doubt that. We have not been back and i tell everyone i know to STAY AWAY!!” 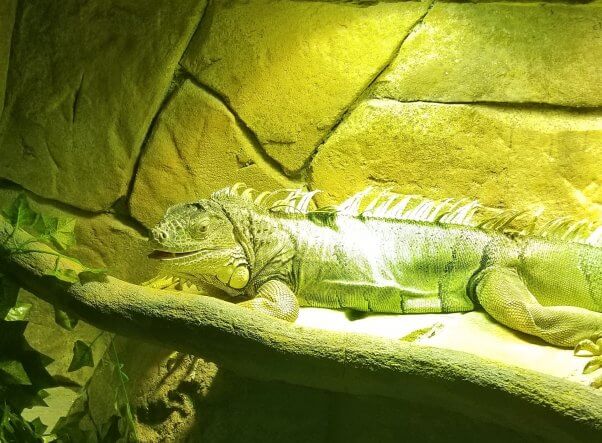 “I don’t normally write reviews but this place was atrocious. I felt guilty a few minutes after walking into this place,” said another Yelp reviewer. “Would give it negative stars if I could. Animals are in concrete enclosures, with no place to rest or get away from people. It’s dirty, overcrowded. Most enclosures are clearly too small for the [animals.] There’s no regulation on snacks being fed to the animals making their water dirty and murky. I really hope this place doesn’t stay open- it’s heartbreaking to see animals kept in this state.”

At SeaQuest Fort Worth in Texas, a TripAdvisor reviewer alleged that one worker “took her baton and flicked [a] bird away with it twice” after the bird made loud noises while the worker tried to talk to patrons.

Over on Yelp, another SeaQuest Fort Worth visitor admitted feeling “ashamed for supporting this place.” Sasha A. wrote, “This place was depressing, run down, and inhumane.” 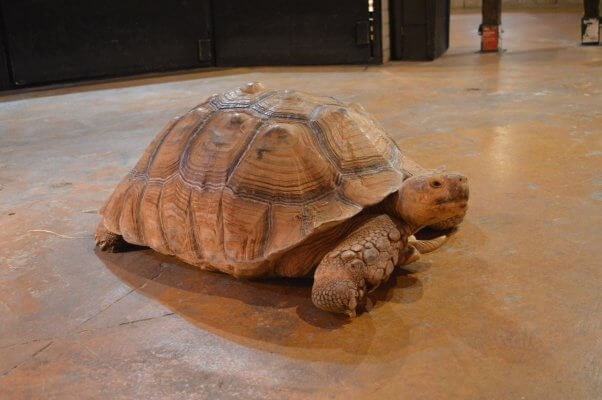 Christie H. noticed that the “pens were filthy, the water and food bowls were filled with urine and feces” and saw a “tortoise pacing in circles around his concrete pen, pausing to eat his own feces.”

SeaQuest Utah can’t copy and paste its way out of trouble.

After Mason T. mentioned on Yelp that at SeaQuest Utah, “[t]he animals are overcrowded with no room to even walk while so many people grab and throw them around,” he noticed something sketchy: “The reply the owner posted to this has been copied and pasted to every single review that touches this topic. Glad to see that they don’t care enough to address the matter.” 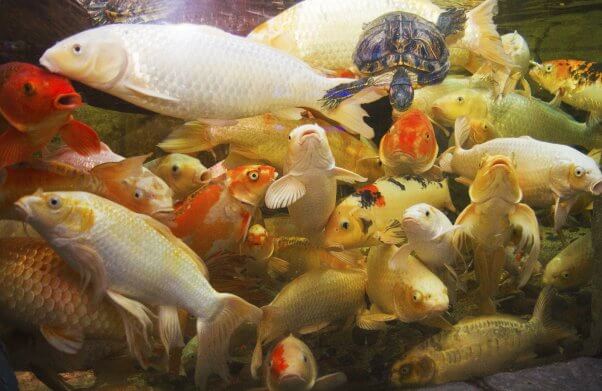 It doesn’t matter that SeaQuest Utah claims it “strive[s] to ensure a 5-star experience with every visit.” Ali S. still took to Yelp to call out the shoddy facility for being “[f]ilthy” and a “[s]ad excuse for a business.”

Mary S. “immediately got a bad feeling when walking in” to the San Antonio Aquarium in Texas, which is operated by Ammon Covino, Vince’s brother.

“The place SMELLS horrible and the animal areas were not clean at all! Especially the poor sting ray areas,” Mary elaborated on Yelp. “You could literally pet fish? How and why would you let children pet fish? Overall it was horrible I felt really bad for all the animals.” 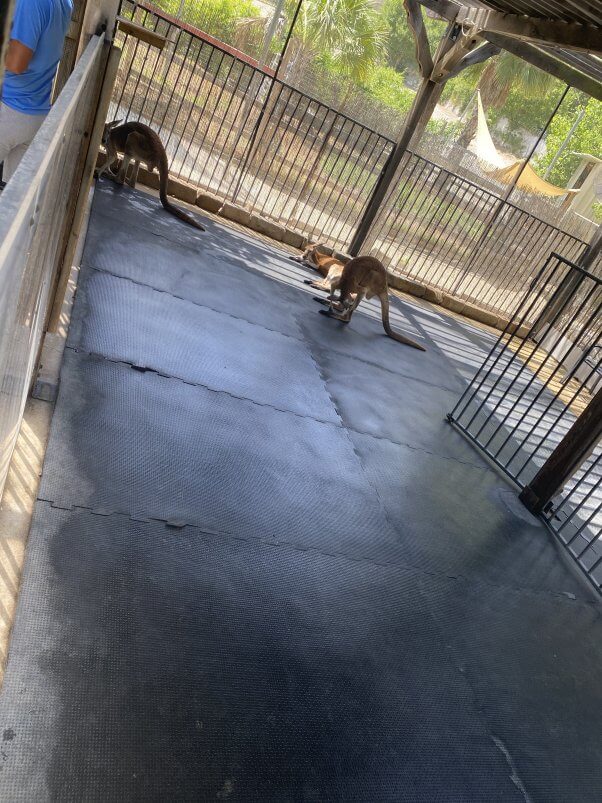 A dismal kangaroo enclosure at the San Antonio Aquarium

“Go here if you want to see a sad excuse of an aquarium,” another reviewer wrote. “You enter into an area that is like a mini prison for small land animals. Enclosures are tiny and disgustingly dirty. No sound proofing … but many of the jailed animals there have sensitive hearing … Pay enough money and you can touch everything there. (Sloths/lemurs/other random tortured animal) The animals look visibly miserable. … This place solely wants to make money extorting the animals in a cruel way.”

At the Austin Aquarium in Texas, operated by Ammon Covino, animals reportedly “barely have enough room to live.”

One TripAdvisor review titled “Animal Cruelty” pointed out the minuscule tanks that the animals are forced to exist in: “This place was horrible. The animals are suffering,” Jaime F. said. “Many of them [are in] really bad conditions.” 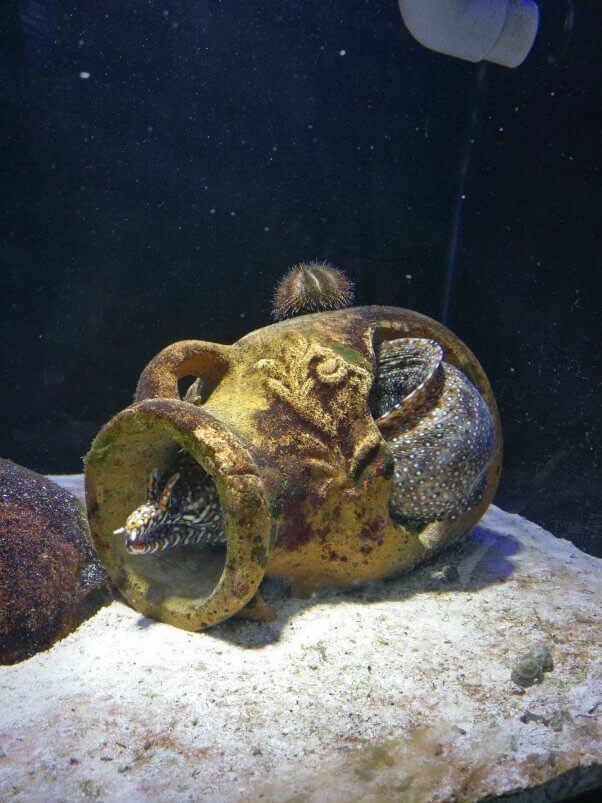 The Reviews Are In—and SeaQuest Is Out

You don’t need to visit a SeaQuest location or any other Covino-operated aquarium to know that doing so will make you feel “guilty for supporting a clear neglect of exotic animals.” The slew of scathing reviews above should be more than enough to persuade anyone to steer clear. So save your money (and your dignity) and spend your time speaking up for the animals imprisoned at these hellholes, instead: