As a vegan, Jessica Chastain has famously said, “I don’t want to torture anything in my life.” And shooting disturbing torture scenes for the upcoming film Zero Dark Thirty, which details the hunt for and takedown of Osama bin Laden, was understandably rough on the actor. But Jessica revealed how she and director Kathryn Bigelow got through it: “During the week that we were filming the interrogations, we sent each other videos of animals being rescued. It was so emotional for me because I rescue dogs and so does she. That’s the kind of stuff that was going on behind the scenes. Like, this is not our lives, we are not these characters, there’s a place that is waiting for us.”

Many of us have experienced how an animal’s love can get us through tough times. Anjelica Huston believes it’s high time for us to return the favor and help heal the wounds of chimpanzees who have been confined to laboratories and experimented on. She penned an impassioned article urging everyone to support the Great Ape Protection and Cost Savings Act, which would free all federally owned chimpanzees and retire them to peaceful, spacious sanctuaries.

Paul McCartney is advocating for turkeys to be freed from the fate of ending up as holiday centerpieces. The legendary musician and animal advocate posed for a new “Say No, Thanks to Turkey” Thanksgiving ad for PETA and reposted it on his Facebook page as a reminder before Christmas.

And scores of other celebrities shared animal-friendly reminders with their Twitter followers: 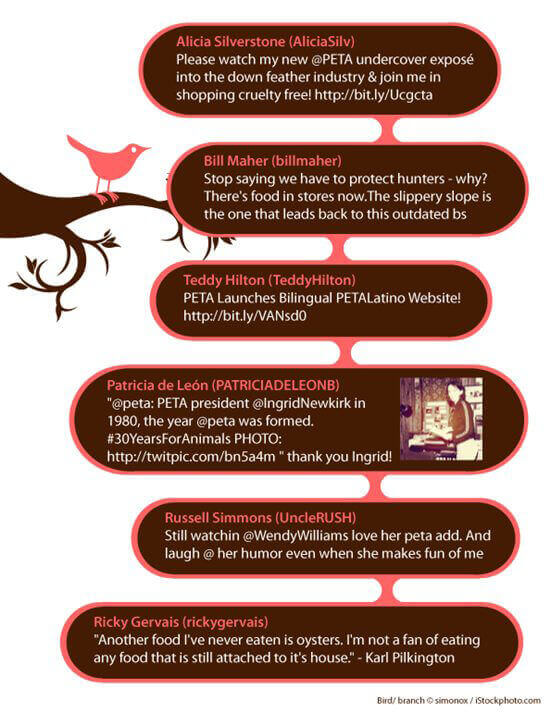 Congratulations are in order for one of our favorite compassionate couples: Jenna Dewan-Tatum and Channing Tatum are expecting their first bundle of joy. With parents like that, we know that their child will be beautiful inside and out.