UPDATE: After receiving veterinary care and TLC at PETA’s shelter for more than four months, Esmeralda has found a new home with a kind woman in New York whose heart broke when she read about the suffering and neglect that the deformed bearded dragon endured at Reptiles by Mack before she was rescued by PETA. The woman had recently lost her rescued “beardie,” Sparky, whom she had lived with for over four years, and she was ready to adopt another beardie in need. Look at these two: Is this a match made in heaven or what? 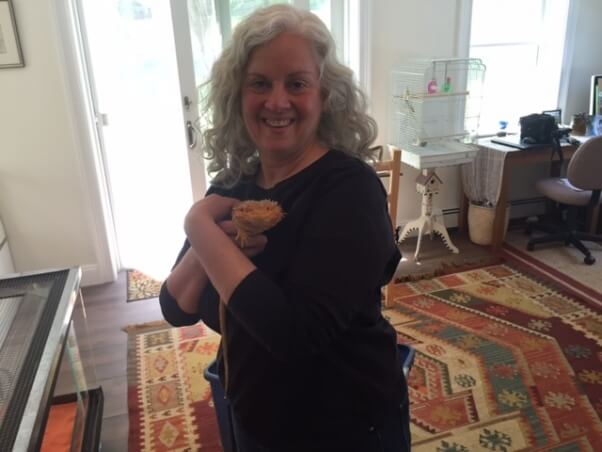 The woman was so grateful for PETA’s efforts to expose the rampant abuse in the reptile trade and for our rescue of Esmeralda that she sent us a generous donation to cover the cost of Esmeralda’s medical treatment and care. We’re thankful for the thoughtful gift, but what makes us happiest of all is that Esmeralda finally has found someone who sees past her outward appearance to her inner beauty, which went unnoticed and unappreciated for so long.

Even in a warehouse full of thousands of animals in varying states of neglect, misery, and decline at Reptiles by Mack—a massive reptile breeder and dealer in Xenia, Ohio, that supplies animals to PetSmart and other pet stores all over the country—Esmeralda stood out.

The sunset-hued bearded dragon was suffering from a spinal deformity that gave her a hunchbacked appearance, so much so that staffers called her Quasimodo, after the hunchback of Notre Dame.

Esmeralda is just one of the millions of animals who suffer in the “pet” trade, many of whom are ripped away from their native habitats, shoved into barren containers alongside dozens of other frightened individuals, and shipped halfway around the world to be sold to large pet-store chains. Others are born in massive breeding mills, warehoused in filthy and crowded conditions, and treated as breeding machines until they can no longer reproduce—at which point they’re usually killed. 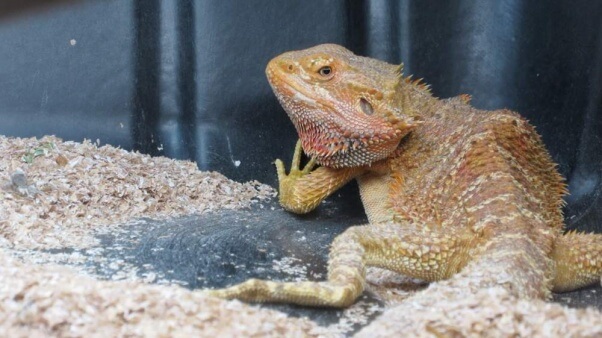 Esmeralda’s deformity was likely a result of a metabolic bone disease, perhaps caused by inbreeding or a lack of proper food or lighting when she was a baby. Since she could neither be bred nor sold, she was kept at Reptiles by Mack as a freak novelty item. Countless other unsalable animals were killed by being gassed in plastic bags, but Esmeralda was kept around as a curiosity, like a shrunken head or a dinosaur fossil. She was kept in a barren plastic tub, where, with nothing to see or do, she lay motionless in the corner all day, staring at the wall—perhaps dreaming she was far away in her species’ native Australian desert. 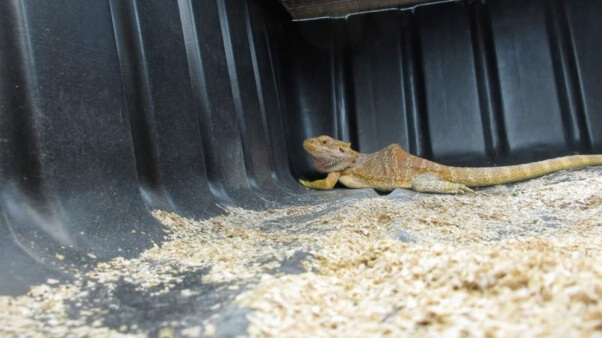 Knowing that Esmeralda was “worthless” to Reptiles by Mack, PETA’s observer asked to take her, and the manager agreed, saying that she had “just been staying here eating our food” for long enough. 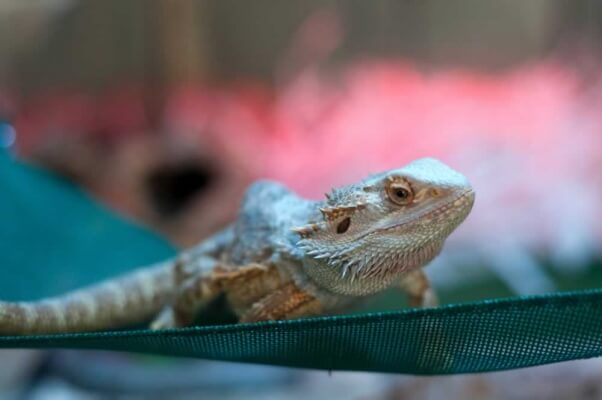 After we had Esmeralda thoroughly checked out by two veterinarians to make sure that her deformity was not painful, we set her up in the Cruelty Investigations Department at PETA’s Sam Simon Center in Norfolk, Virginia, where she finally has the opportunity to do some basic beardie things—such as burrowing in nesting materials, enjoying fresh veggies, climbing and basking on logs, soaking in a water bowl, and getting some stimulation for the first time in her life. 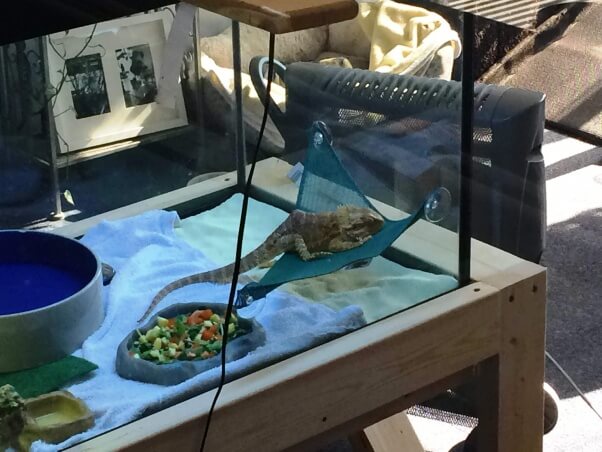 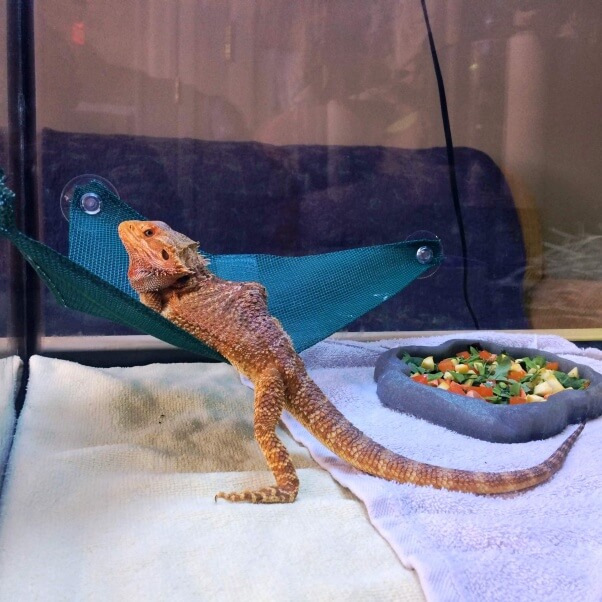 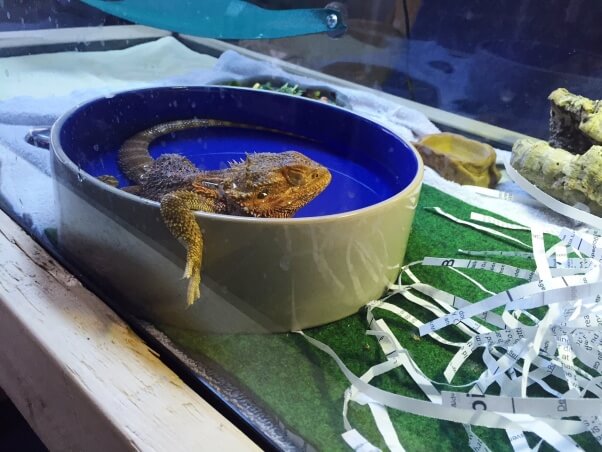 She was a little shy at first, but she is slowly coming out of her shell. She watches everything that is going on around her, soaking up all the sights and sounds after a life of sensory deprivation. Every morning, Esmeralda spends some quality time with PETA fieldworker Heather, perching on her shoulder while she checks her e-mail. 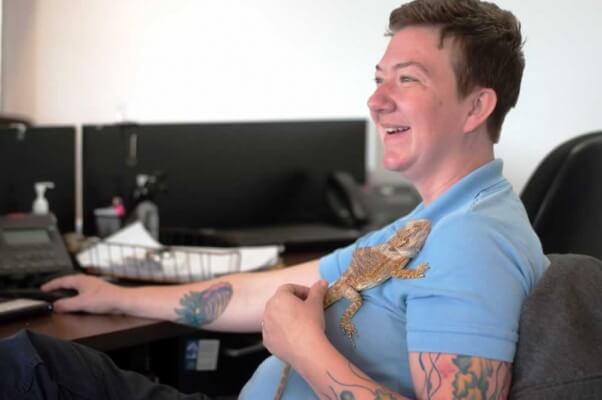 The other bearded dragons who are treated as breeding machines at Reptiles by Mack will never know anything but misery, including the sick, emaciated female whom a manager said he would kill once she had finished laying her eggs—or the young females who died after being put into tubs with large males in an effort to speed up production of the next generation of breeders, a practice that a supervisor described as “throwing little kids in there to get raped.”

We know that someone out there has the perfect sanctuary for our heroic little hunchback. Could that someone be you? You don’t need a cathedral—a loving home will do nicely. E-mail [email protected] to find out more. 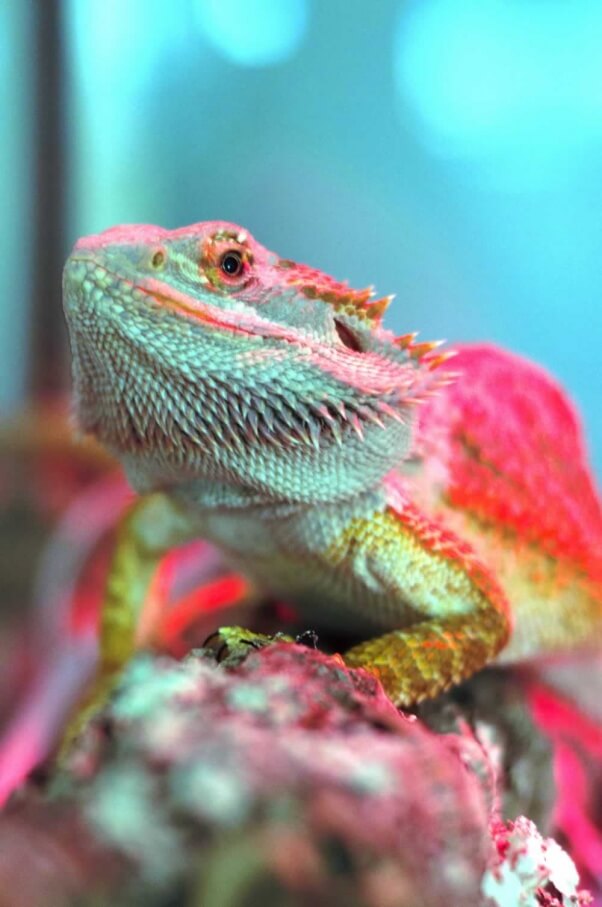