When someone in New Jersey noticed that kids were pestering a goose who was sitting in the grass outside the woman’s apartment—and that the goose didn’t fly away or fight back—it became clear that the bird was injured. Her wing was drooping badly, and she was weak and lethargic. With a friend’s assistance, the goose was moved to a laundry area to protect her from harassment and predators, but lacking a car, the rescuer couldn’t transport her to a wildlife rehabilitator licensed by the U.S. Fish and Wildlife Service (since Canada geese are protected under the Migratory Bird Treaty Act), as advised by authorities. 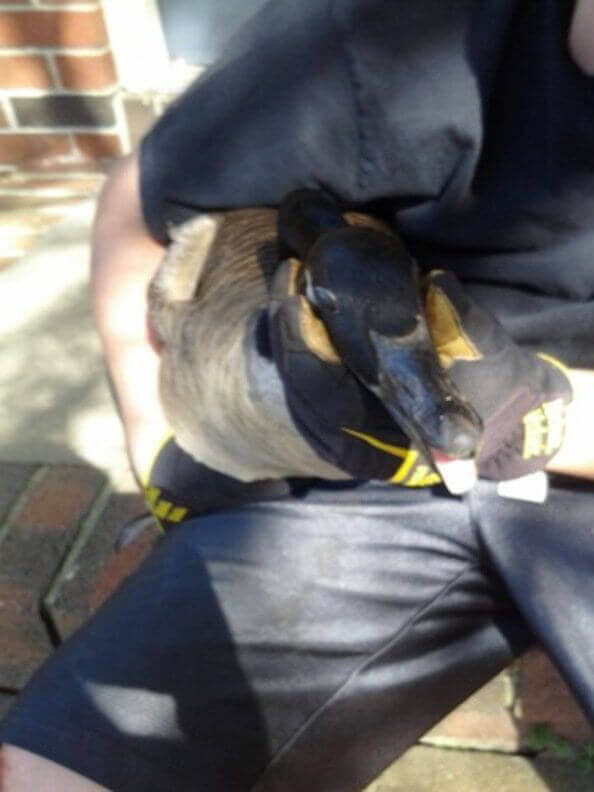 What’s Good for the Goose

Fortunately for the goose, her protector called PETA. Although there were no agencies in the area able to retrieve an injured wild animal and transport her to a licensed rehabilitation facility (this isn’t uncommon since wildlife rehab centers are usually volunteer-run, without staff to rescue or transport animals), PETA’s caseworker located a rehabilitator who was willing to accept the bird—but that had already closed for the day. With the rehabber’s permission, the caller held the goose overnight. (Bless her kind heart!)

In the morning, PETA was able to find an animal advocate to transport the bird to the rehabilitator, which required driving for nearly three hours in all. (Bless his kind heart, too!)

The bird’s injury was old, which explains why she was so easy to catch. A wing was broken, and the surrounding tissue was badly infected and necrotic. The bird was slowly dying from the infection and had gotten to the point at which she had no energy to fight. The goose had probably also lost her mate, which would cause depression in the long-term. It was determined that the kindest course of action was to end her suffering through properly administered euthanasia.

Are You Ready for an Animal Emergency?

This case shows how one person can make a difference for an animal in distress. If these compassionate people hadn’t helped this goose, she might still be lingering in agony—or dead after a violent attack by predators (or simply cruel humans). Please never ignore animals who need help. Even if the best-case scenario entails euthanasia, that’s far kinder than leaving an animal to endure prolonged suffering.