It isn’t quite Easter yet, but one Los Angeles woman still got a surprise from a bunny. Taken aback to see a big, fluffy black-and-white rabbit calmly nibbling grass near her home, she called PETA and asked how she could tell if the animal were a wild rabbit or a domesticated bunny someone had simply turned loose outdoors after growing tired of caring for the animal. 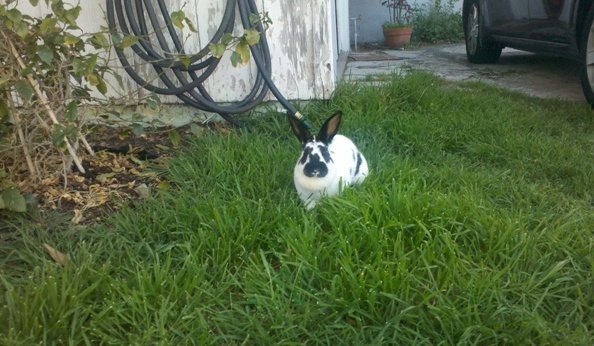 This lucky (and adorable!) bunny got a second chance at finding a good home

Based on the rabbit’s physical description and friendly demeanor, it was clear that the little one had been someone’s companion. And as the PETA employee explained, domesticated rabbits lack the survival skills and training of their wild counterparts and will fall victim to predators, cruel people, or foreign parasites and diseases against which they lack a natural immunity.

The caller did everything right: She safely secured the bunny in a large box, carried the animal into her home, and called someone at the local animal shelter, who drove out and picked the bunny up. The friendly rabbit likely hadn’t been outside for long since the animal was still very healthy, and the fluffy one now has a second chance at finding a forever home.

If you are considering adopting a rabbit, don’t buy; go to a shelter or a rescue group.