Look at the photo below and you’ll see her—in between the fertilizer spreader and the recycling bin. No, that’s not a stuffed rabbit in the tiny cage behind the plastic toy truck—that’s a living, breathing being consigned to a miserable, lonely existence along with the other things people stick outside and forget about. This rabbit was never allowed out of the cramped metal cage, and aside from her owner’s tossing her some food and water once in awhile, she never received any attention at all. 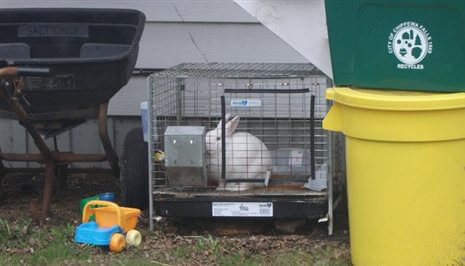 A concerned person saw the bunny and knew that with the harsh northern winter already knocking on the door and only an open staircase for “shelter,” the rabbit might not live to see another Easter. She tried talking the owner into surrendering the rabbit to her, to no avail. She called PETA for help, and working with local law enforcement, we put pressure on the owner to provide a suitable home for the rabbit. The owner soon tired of hearing from both PETA and the police and agreed to surrender the rabbit into her rescuer’s waiting arms.

Now the bunny is living the sweet life indoors because of one woman’s persistence and dedication to justice for animals. She is proof positive that even if you can’t change the entire world, with a little work, you can change one animal’s entire world.