Former “pussycat” Kimberly Wyatt instinctively knows that torturing rabbits, mice, and other animals for makeup is wrong. In her new ad for PETA U.K., Kimberly, who has her own line of cruelty-free cosmetics, exposes the painful and often deadly effects that chemical tests have on animals. 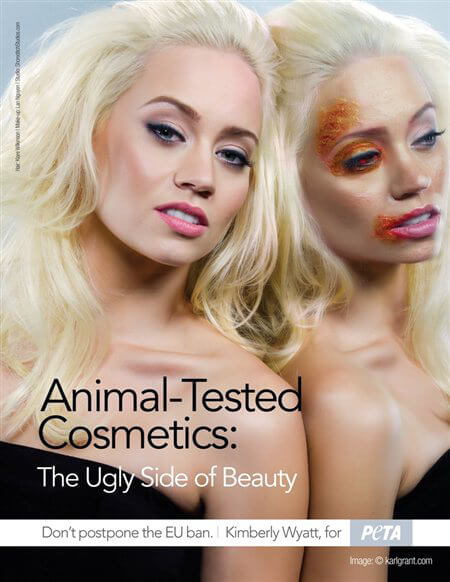 Testing cosmetics on animals has been banned within the European Union (E.U.) since 2009. The E.U. also approved a ban on the sale of cosmetics containing ingredients that were tested on animals elsewhere, effective in 2013. But under pressure from some cosmetics companies, the E.U. is considering delaying that ban. Kimberly is hopeful that her ad will encourage the E.U. to uphold the original deadline.

She’s got a lot of support: After PETA U.K., PETA Germany, and PETA Netherlands sent out action alerts to their members, the European Commission (the E.U.’s executive branch) received more than 20,000 e-mails urging it not to delay the ban. And when PETA U.S. sent out a similar action alert, we quickly collected and delivered more than 50,000 letters from people in the U.S. and other countries imploring the European Commission to keep the deadline and keep animals safe.

On this side of the pond, we aren’t fortunate enough to have such a ban yet, but we can implement one in our homes by buying only cruelty-free products.