A new billboard featuring artwork that depicts slaughtered pigs lying in an idyllic pasture will now greet Philadelphia motorists driving to their local Whole Foods store. The billboard—which reads, “Humane: Sounds Nice, But It’s Still Murder”—comes on the heels of a recent video investigation that found pigs were severely crowded, miserably confined, and left to languish with injuries and illnesses for weeks before being shipped to slaughter by a Pennsylvania-based Whole Foods supplier of “humanely raised” meat. PETA plans to place the billboard in other cities across the country as well. 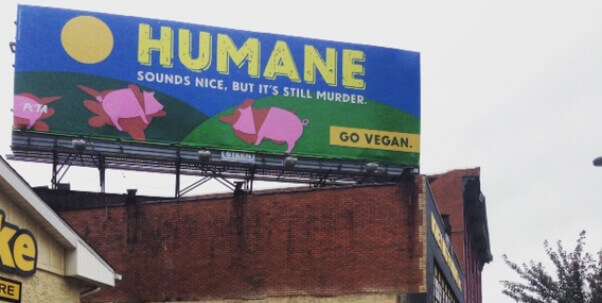 “Kind-hearted shoppers are being hoodwinked by meat and dairy products that are marked ‘humane,’ but the horrifying conditions on this Pennsylvania farm show there’s simply no such thing as ‘humane meat,'” says PETA Executive Vice President Tracy Reiman. “As long as profits are involved, animals will suffer.”

PETA exposed multiple discrepancies between Whole Foods’ “5-Step™” animal-care standards and the daily reality for pigs at Sweet Stem Farm, LLC, in Pennsylvania. Some pigs were given only about 5 square feet of space on a concrete floor, and none of them had access to the farm’s lush green grass. Pigs were left to suffer from fever, lameness, bleeding rectal prolapses, and other conditions for weeks without being examined or treated by a veterinarian, to the eyewitness’s knowledge. And although Whole Foods claims, “Our Meat: No Antibiotics, Ever,” many pigs who were given antibiotics were sent to a slaughterhouse that supplies the supermarket chain.