Pope Benedict’s recent comments regarding condom use have some folks and followers confused, but there can be no mistaking the very clear message in PETA’s new international campaign: 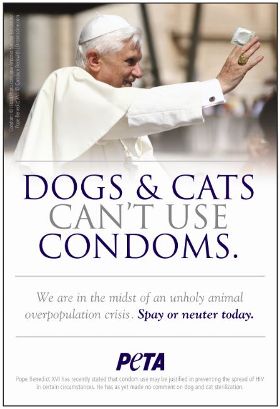 Visitors to the Vatican yesterday were the first to receive our new “Pope Condom” campaign leaflets, which we’ll also soon be taking to cathedrals and churches across the U.S.

Simply stated: It’s sinful that millions of dogs and cats are killed every year in animal shelters simply because there aren’t enough homes for all of them—and that millions more are abandoned on the streets, where they starve, die of untreated injuries or illnesses, or fall prey to animal abusers. The simple solution is to always spay and neuter animals instead of allowing them to produce countless offspring. Please help us bring salvation to dogs and cats by singing the praises of spaying and neutering to everyone you know.

Update: People have been alerted to this blog and were asked to express their dislike of our campaign. We’ve posted some of the comments that weren’t inappropriate. However, PETA’s job is to draw attention to animal suffering, and we have found that provocative tactics yield more attention than the facts alone, which aren’t enough to attract interest in today’s tabloid media. We must push the envelope to get animals’ stories out there. By harnessing controversial issues like Pope Benedict’s comments about condom use, we have created a forum for discussion in the media and online, and even within the church. We welcome discussion about—and even criticism of—our ads and campaigns because we know that getting people talking is the first step in raising awareness.

We understand that some may consider our use of Pope Benedict’s image inflammatory, and we are sorry if these images have offended you. The pope is a compassionate man who has spoken out for animals in the past and is well known for his love of cats. We believe that he would support our lifesaving message and our efforts to prevent suffering and death.

Catholics—and all Christians—should be appalled by the degree of suffering that we inflict on animals. Jesus’ teachings say that we should show love and compassion for all of God’s creation—qualities that are notoriously absent in puppy mills and catteries. Bred to death, delivering litter after litter in conditions rife with filth and disease, these animals are doomed to their own hell. The solution is simple: Spay and neuter every animal and always adopt from an animal shelter—never buy from breeders or pet stores. More than 500 animals are euthanized every hour in the U.S. because there are too many of them and not enough good homes—that adds up to as many as 4 million animals every year. We won’t back down from our message that people who want to share their lives with an animal must always adopt a sterilized animal, never buy or breed.