Four out of five Americans want food companies to reduce cruel factory-farming practices in their supply chains, even if it means price hikes, according to a recent poll conducted by NRG Research Group. The poll questioned respondents regarding their views on whether food companies should require that their suppliers take steps to ensure better welfare for chickens, and in all instances, more than three-quarters of Americans responded that restaurants and grocers should act to help reduce the suffering of these animals.

Chickens deserve better! No one should live like this. pic.twitter.com/TNJklz8Hju

While we’re thrilled that so many folks are concerned about the welfare of these animals, there’s one big problem: “Humane” meat doesn’t exist.

Consumers are becoming more and more concerned with what they put into their bodies, and suppliers are capitalizing on this. Packages of meat, eggs, and dairy “products” feature pictures of happy animals running near quaint country barns and reassuring labels proclaiming “organic,” “grass-fed,” “free-range,” or “cage-free.” Don’t be misled by false advertising: Immense animal suffering still occurs on these so-called “organic,” “free-range,” and “humane” factory farms.

Even on so-called “humane” farms, animals’ tails are cut off and their ears are painfully notched. They’re also debeaked, dehorned, or castrated without painkillers. These animals are kept in crowded conditions without sunlight or fresh air, their beloved children are taken away from them, and they’re denied the companionship of others. And just like animals on other factory farms, they’re sent to a feedlot and face the trauma of capture, the horror of transportation in all weather conditions, and the terror of seeing other animals killed before enduring the same fate.

If the animal DIES, it's NOT HUMANE.

RT if you know there's no such thing as "humane meat"! pic.twitter.com/XbgxX0LNYU

In 2015, a PETA eyewitness investigation revealed severe crowding, lameness, and death at one of Whole Foods’ “humane” pork suppliers. The pigs observed by our eyewitness were never given the opportunity to touch the farm’s lush green grass. They spent almost all their time crammed into crowded sheds on concrete floors. Visibly sick and injured pigs would suffer for days or even weeks without any veterinary care. Workers hit pigs who were being loaded onto trucks to be taken to the slaughterhouse. And two dead pigs were diagnosed as having had highly contagious salmonellosis. This is Whole Foods’ “Happy Meat.”

So-called “humane farms” aren’t monitored, standards aren’t enforced, and the farms don’t have to comply with any outside authority.

This issue extends beyond packaged meat—the egg industry misleads customers with “cage-free” labeling, but “cage-free” is far from synonymous with “cruelty-free.” Dairy farms that label their items “organic” are also misleading customers into thinking that conditions on these farms are somehow better: Cows on “organic” dairy farms are crowded into cramped sheds or onto mud-filled lots and repeatedly forcibly impregnated.

Chickens are inquisitive, interesting animals who are as intelligent as mammals such as cats, dogs, and even some primates. They’re very social and like to spend their days together, scratching for food, taking dust baths, roosting in trees, and lying in the sun.

Considering that chickens are arguably the most abused animals on the planet, they should be one of the first animals we remove from our plates.

Don’t Be Fooled by False Labels—Go Vegan, Instead

Bottom line: “Humane” meat is a myth that dupes well-intentioned shoppers into paying higher prices for the products of the very conditions of crowding, lingering deaths, and suffering that they were trying to avoid. We’re thrilled that the majority of Americans are concerned for the welfare of chickens. The measures mentioned in the NRG Research Group poll may reduce the suffering endured by chickens killed for their flesh, but animals deserve more. The only way to avoid supporting the pervasive cruelty involved in modern meat production is to go vegan. 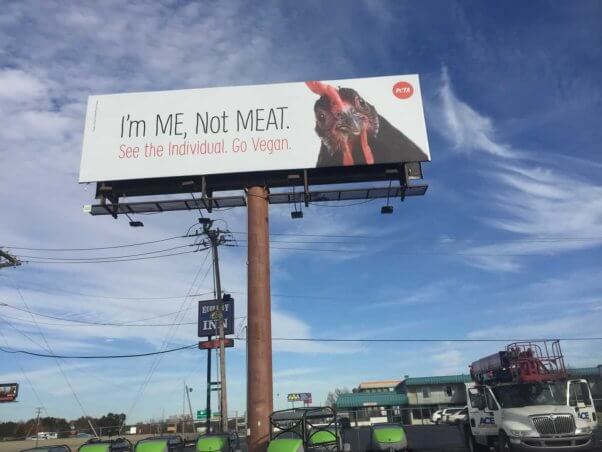 Click the button below to order your free vegan starter kit, and discover just how easy it is to make the compassionate switch to a cruelty-free diet today: