From organizing Super Bowl Sunday and Winter Olympics demonstrations to protesting sponsors of the upcoming deadly Iditarod race, PETA has been hard at work stopping cruelty. Check out some of the latest PETA demonstrations that stopped folks in their tracks.

No one gets away with supporting cruelty on our watch.

Recently, we continued to target Canada Goose for its cruel jackets—which are stuffed with down from abused birds and lined with dead animal skin—by hosting three different protests across Ontario, Canada. All the events featured a PETA “coyote” who struggled in a “bloody” steel trap on top of a giant Canada Goose logo. As we expected, people cringed as they walked past the shocking scenes.

THIS is how you get people’s attention 👇 A bloodied “coyote” shows #Waterloo how @CanadaGooseInc steals fur from coyotes to trim its coats. pic.twitter.com/UPBuccx9MD

Because Jack Daniel’s has refused to drop its sponsorship of the deadly Iditarod dog-sledding race, PETA made a scene outside its parent company’s headquarters by setting up a ghastly “graveyard.” Five “dead dogs”—representing the five who died during the 2017 Iditarod race—lay in front of headstones engraved with the name, age, and cause of death of each of the dogs who had died. 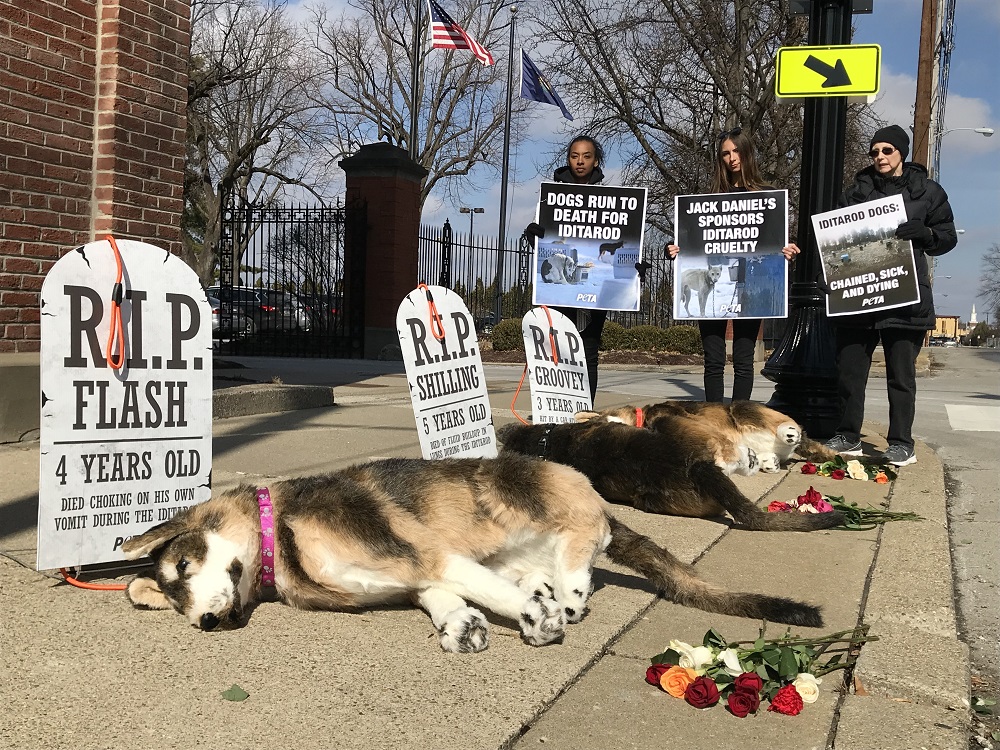 Texas A&M University (TAMU) should know by now that until it shuts down the cruel dog experiments taking place in its labs, the school can expect us to show up at any event it holds. Recently, PETA activists crashed a TAMU Board of Regents meeting brandishing signs that read, “Sit. Stay. Beg for Mercy” and “Michael Young: Stop Cruel Muscular Dystrophy Experiments on Dogs.” 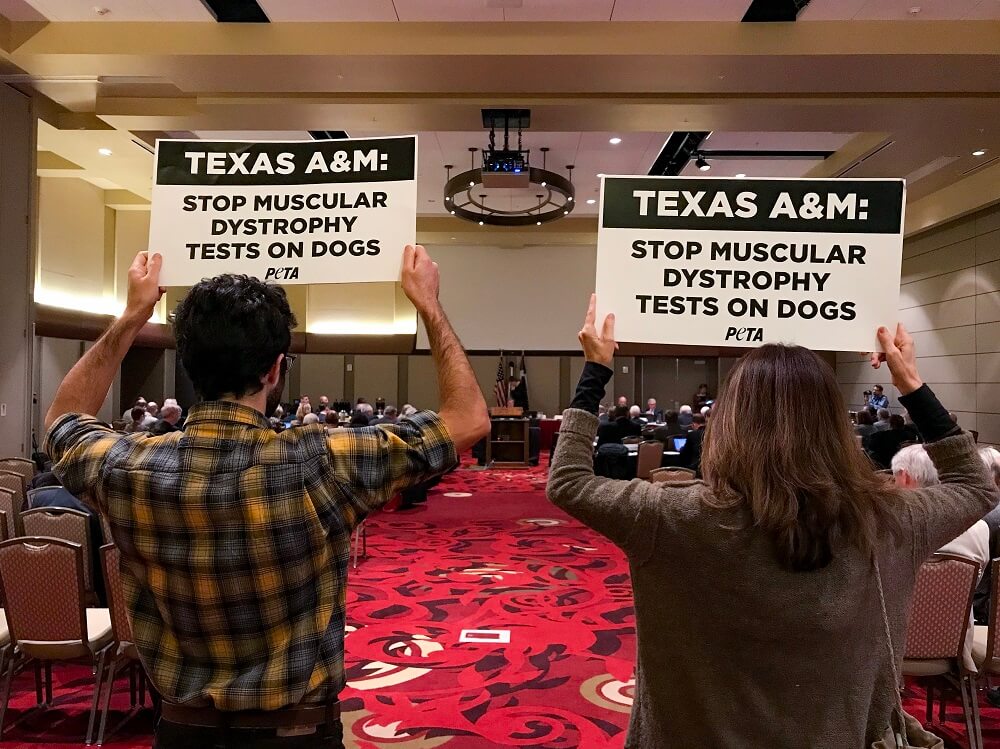 Two teams, in San Diego and San Antonio, respectively, informed the masses about SeaWorld’s cruelty with the “I, Orca” program, which uses wireless Google virtual-reality goggles to immerse participants in a world in which they can swim freely in the ocean with an orca family. After the experience, many people proclaimed that they’d never visit SeaWorld. 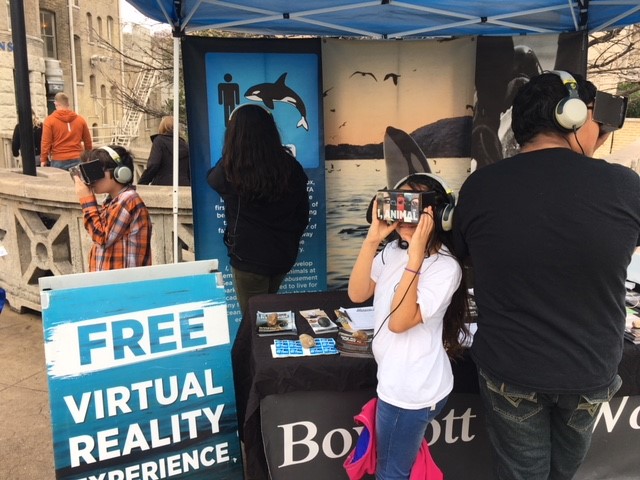 Who else spreads the good vegan word as effectively as PETA?

The PETA animals have a compassionate message for #NYC 💚 #GoVegan pic.twitter.com/QViyk7MMwn

Every year, millions of chickens are slaughtered only to end up as finger “food” for football fans. That’s why ahead of Super Bowl LII, PETA visited the cities of both contenders, Boston and Philadelphia, to urge everyone to bypass traditional game-day wings in favor of mouthwatering vegan snacks.

Let birds keep their wings ❤️ PETA supporters have an important message for the #Philadelphia #Eagles’ hometown ahead of the #SuperBowl. #GoVegan #SBLII pic.twitter.com/VQSUKcMAH3

#Boston is getting a present from PETA supporters 🤗 #Patriots fans are receiving chicken squeezy toys with a compassionate message ahead of the #SuperBowl 💚 #GoVegan pic.twitter.com/IAQ6rl08EA

In the spirit of Super Bowl parties, we also donated heaps of vegan wings made by the delectable Herbivorous Butcher to the Simpson Housing Services emergency overnight shelter in Minneapolis. 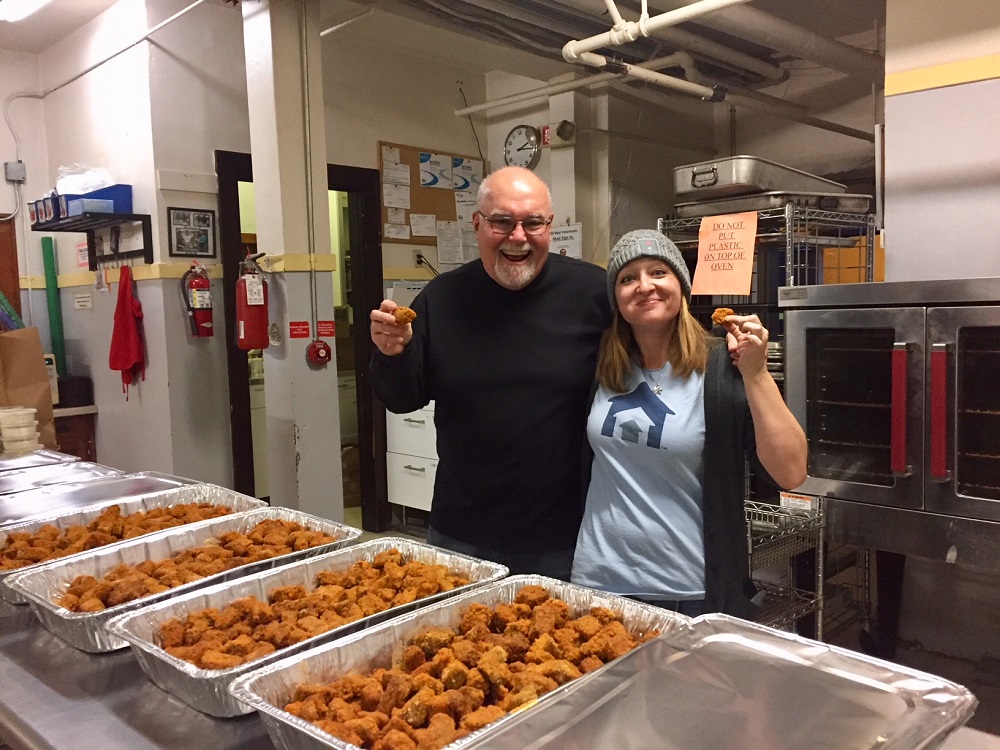 Right outside the 13th Annual Portland Seafood & Wine Festival, PETA challenged attendees to consider what “seafood” really is—namely, the corpse of an abused animal who didn’t want to die. Passersby gawked at our life-size “lobster” sprawled out on a giant plate, complete with to-scale cutlery, a garnish of cilantro, and a side of vegan butter. 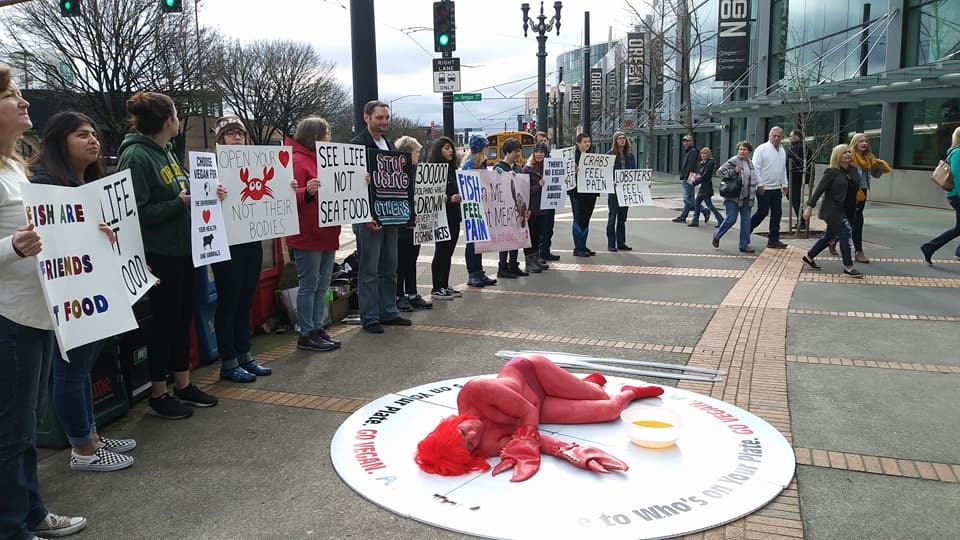 On the cusp of the Winter Olympics in PyeongChang, South Korea, a PETA Asia “bunny” “froze her tail off” to save animals, catching the interest of international media outlets. The cotton-tailed cutie greeted the Olympic Committee, athletes, tourists, and locals and reminded them that the fur of rabbits and other animals belongs only on its original owners.

So disappointing to see fur being used in costumes in the #OpeningCeremony for #PyeongChang2018 😔 It’s 2018. Champions don’t wear fur! #FurIsDead pic.twitter.com/wjZ7WKnl3a