When a group of bloodthirsty zombies descends on New York City, where do they head? To the Meatpacking District, of course. Because all animals are made of flesh, bones, and blood and all animals feel pain, zombies don’t see a difference between eating people and eating animals.

Goth star Sharon Needles, the winner of RuPaul’s Drag Race, doesn’t see a difference, either. She joined the troop of undead to reveal her macabre PETA ad just in time for Halloween. 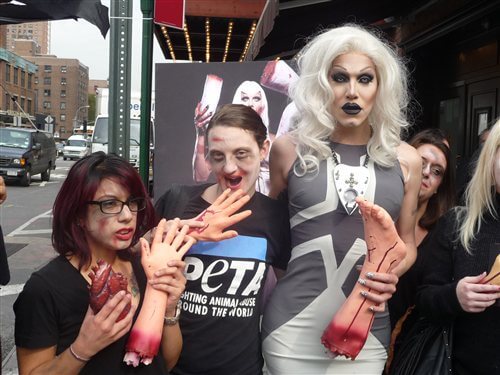 For a limited time, PETA is offering magnets featuring Sharon’s ad—for $6.66! Spooky. And the Logo network, which airs Drag Race, is running a 30-second PETA public service announcement during its Halloween programming.

And now for the scariest thing that you’ll see this Halloween … click here.