PETA is urging the public to beware of PETCO’s “Turtle Relinquishment Program”—a deceptively named ploy to essentially solicit free turtles from unsuspecting people in order to funnel them back into the pet trade, through a meat farm! 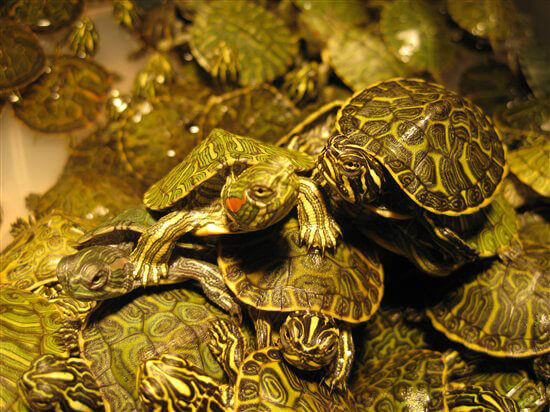 Most states have laws either banning or restricting the sale of turtles, so it is likely that any you see at a pet store were captured illegally or raised in less-than-humane conditions.

Capitalizing on a recent rash of pet turtle–related cases of salmonella poisoning in humans, the shameless pet store chain—which has a terrible record already when it comes to animal welfare—has announced that anyone can bring a turtle of any size to its stores. PETCO then ships those turtles to its own vendor, Concordia Turtle Farm in Louisiana, which has said that it will “treat” the turtles for salmonella.

Well, this might sound like a noble effort to some, but shipping turtles is extremely stressful on them. And to add insult to injury, there really isn’t any way to rid reptiles of salmonella—they naturally carry it in their intestinal tract! What’s more, what PETCO doesn’t tell consumers, and what PETA has learned, is that Concordia Turtle Farm exports 80 percent of its turtles overseas—mostly to China, where they grow larger and are then slaughtered for meat. Although it’s unclear whether the relinquished turtles will end up on Chinese plates, this business deal brings up several important questions. Why would PETCO ally itself with a meat-trade supplier? And if it’s “concerned” about human health, why is the company selling turtles in the first place? 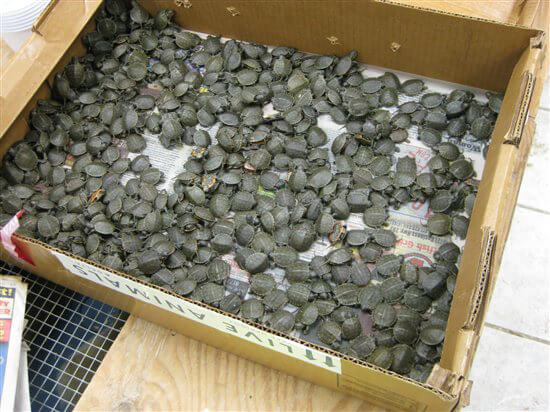 Living conditions during the trip from the breeder or dealer are typically cramped and unsanitary, and many reptiles do not survive the ordeal.